Armed Forces Pensions Focus – Nothing Is Certain But Death And Taxes!

The new tax year has just begun and you may well be thinking about how your tax affairs will work once you have left the Armed Forces.

In this short article Mary Petley of the Forces Pension Society explains the basics. 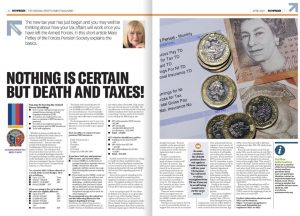 You may be leaving the Armed Forces intending:

Whichever group you fall into, the following captures the basics that you need to understand about tax.

Pensions and EDP income count as ‘earned income’ – they are normally taxable but National Insurance Contributions (NICs) are not due in respect of them.  The only time that the pension becomes tax-free is in the event of a medical discharge where the Principal Invaliding Condition giving rise to the discharge is due to service AND attracts a Guaranteed Income Payment from the Armed Forces Compensation Scheme or a War Pension.

Tax rates for 2021/22 have altered as a result of the recent Budget.   They are as follows:

If you are going to live in Scotland, the rates are slightly different:

The band assessed as ‘zero’ is your tax allowance.  You are only allowed one tax allowance and, normally, it goes against your pay.

Your tax office in respect of your pension/EDP income is:

If you have both pay and pension/EDP income, you need to either:

We recommend a) as the safest bet and the following illustrates the impact of getting it wrong:

Fred leaves the Armed Forces with a pension of £14,000 and EDP income of £2,000.  He lives in Sheffield and lands a job with a salary of £45,000.  That means his total ‘earned income’ is £61,000.  His tax allowance is on his pay but he has not told his employer how much pension he is receiving.  He lives south of the border so he will pay the following in tax:

BUT what he should have paid is:

Had he received the correct tax coding, it could have been established when the 40% tax band had been reached the correct amount of tax deducted.  As it is he has underpaid £2,146 tax and HMRC will contact him regarding payment of that sum.

Some of you may be intending to live abroad and will be wondering what happens in relation to income tax if you do so.  The default position is that your pension/EDP income will be subject to UK tax BUT there are some exceptions.

If you are going to pay UK tax, either by default or by choice, it is a good idea to get a copy of the Double Taxation Agreement between the UK and the country in which you are going to reside.  These Double Taxation Agreements are formal agreements about how countries will treat monies upon which UK tax has already been paid.  They are available on the government website and it is a good idea to keep an eye on the relevant Agreement just in case it changes.

In some countries the default position does not apply as these countries will tax your UK income.  You will need to claim exemption from UK tax if you are to avoid being taxed twice on the same money.  Canada is an example, but you will need to check in respect of the country you intend to move to.  The relevant form for Canada is at: http://www.hmrc.gov.uk/cnr/canada-individual.pdf .

There are some countries whose tax regime you can choose to be taxed under and the HMRC website provides further details.

Whether you are taxed in the UK or not, if you are living abroad, we suggest that you use an accountant who understands the tax regime in your country of residence. Even if you only do this for the first year’s tax return, it will enable you to learn the relevant tax rules.  If your pension/EDP income is taxed in the UK, remember to give your accountant an up-to-date copy of any Double Taxation Agreement in force for that tax year.  Further HMRC information on tax for those living abroad is at https://www.gov.uk/tax-uk-income-live-abroad.

Finally, a few words about NICs to complete the income-related tax picture.

Further information about tax and NICs can be found at:

If you are a member of the Forces Pension Society and would like to know more about pension tax or any other pension issue, email us on pensionenquiries@forpen.co.uk.  If you are not a member but would like to learn more about us, visit   www.forcespensionsociety.org. 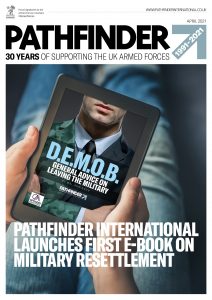