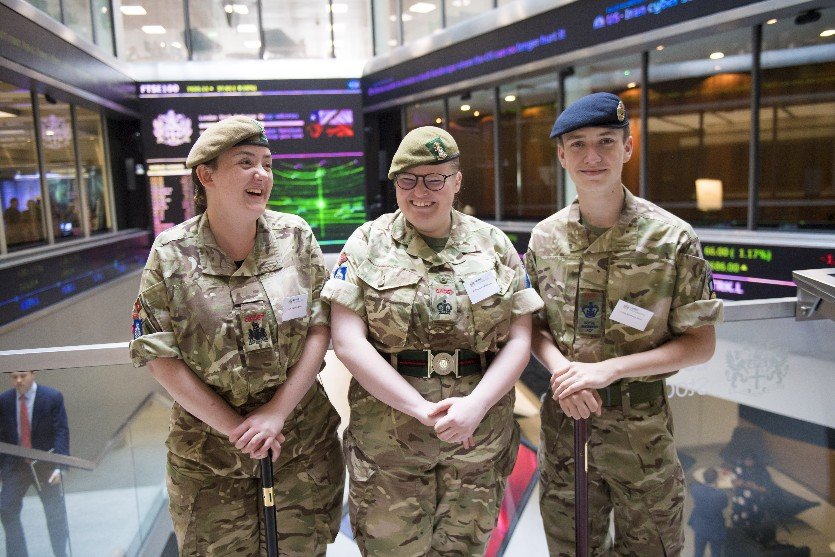 The military and business communities have come together at the heart of British business to celebrate the success of the first business course for the Army Cadet Force, run by X-Forces Enterprise…

In a ceremony on Tuesday 2nd July at London Stock Exchange, the 17 Army Cadets that attended the pilot Enterprise For Life® – Cadets Programme were presented with certificates by the Rt Hon. the Lord Young of Graffham CH.

The interactive and experiential weekend course in March 2019 offered an insight into business and, through a variety of collaborative tasks, inspired entrepreneurial thinking in the Cadets, aged between 16 and 18. The young people, who had travelled from Army Cadet units around the UK, also presented their business ideas in a ‘Dragon’s Den’ style pitch.

Members of the Army Cadet Force had previously expressed a keen interest in understanding business, marketing and finance topics which have not to date been available through traditional Cadet learning programmes. Feedback from the residential course attendees was entirely positive, and consequently a second course is set for autumn 2019 in the South West and a third for early 2020 in the North West. This programme is voluntary and open to all the Army Cadet Force units.

The course, developed by X-Forces Enterprise (XFE) Founder and CEO Ren Kapur MBE, is another element in a suite of enterprise support provided by XFE to the Armed Forces community. Ren Kapur said: “With a world that is moving technologically fast and an economy needing to compete on a global stage, it is so important that we equip our society with the best understanding of business.

“This understanding is no longer a nice to have but an essential skill to support career pathways; be that in serving your country, working for yourself, for another business, third sector or the civil service. The movement of money and how each department of any institution coexists in commerce has been an eye opener for the young cadets on the programme.

“What was even more interesting was that each of the cadets’ enterprise ideas had a societal impact they were trying to address, whilst providing a product or service to the consumer; reflecting how the new generation of talent is not just focused on money and growth but success is also defined by ethics.”

The XFE Enterprise For Life® course has been recognised by The Duke of York iDEA – Inspiring Digital Enterprise Award – programme, the digital and enterprise equivalent of The Duke of Edinburgh Award. Cadets completing the course will receive an X-Forces Enterprise badge as part of their record of achievement.

Alongside the certificate of attendance presentation, a panel that included representatives from the British Army, London Stock Exchange Group, GKN Aerospace, Capita and the Cadets discussed the development of enterprise skills in young people. XFE shared data that suggests that teaching programmes such as Enterprise For Life® result in increased confidence and motivation, thereby supporting the community and responding to future economic and career demands.

The Cadets’ graduation event was supported by Capita plc and hosted by London Stock Exchange Group.