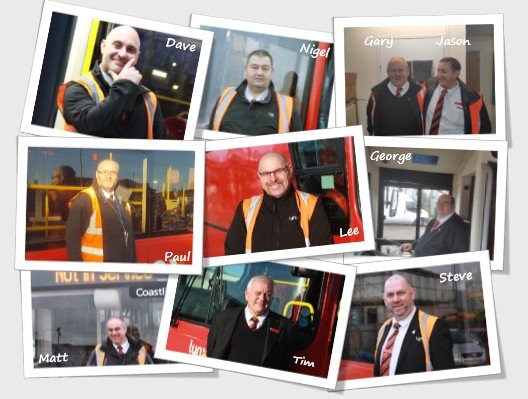 For many people, January is the time of year to think about a fresh start. It’s during this month many of us declare; ‘new year, new me’. Unfortunately, for most of us, the idea is long forgotten by 1st February. However, one group of bus drivers in Kings Lynn are still going strong and have lost a staggering 233lbs combined to date, all for a good cause.

From an incredible 57lbs to 4 lbs, the team of nine have been working tirelessly since January to shed the lbs and raise vital funds for Scotty’s Little Soldiers. From taking up new exercise regimes to diet overhauls, every member of the team has pulled their weight and raised an amazing £790.80.

Founded by war widow Nikki Scott in 2010, Scotty’s Little Soldiers now supports over 370 bereaved British military children and young people across the country. Nikki said: “We’re all so grateful to the team at Lynx for all their hard work which, will not only improve their own lives but will go a long way to helping us make life better for even more bereaved Armed Forces children across the UK.”

Nigel Fish who has lost over 4 stone so far, through a combination of changing his diet and boxing, selected Scotty’s as the charity, the team would support due to his ties to the British Armed Forces. Nigel, who served in the Army prior to working for Lynx, said: “Scotty’s Little Soldiers is a charity that’s close to my heart.

Whilst serving I lost comrades who left families behind and I think Scotty’s does an amazing job of helping those families move on with their lives. I feel honoured to have the opportunity to support the charity and the families of fallen veterans. On behalf of my colleagues and myself, I would also like to thank the management team for their support and encouragement.”

Not only have Nigel and the team of drivers been busy spreading the word about Scotty’s and their weight loss journey on their bus routes, but the wider team have been supporting them with a substantial donation of £470, as well as helping to make posters advertising the campaign. Lynx and Scotty’s have been overwhelmed by the support of the local community.

Nigel and the team have now committed to making this change a new way of life and are encouraging others to think about committing to a healthier lifestyle.