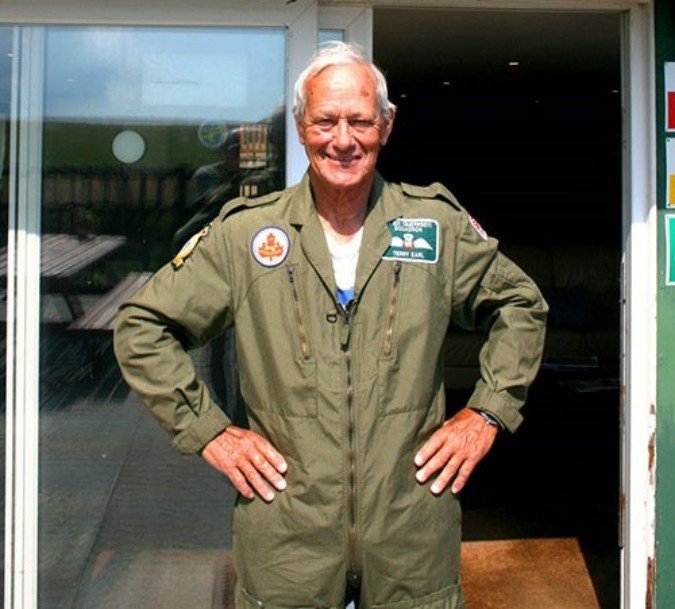 A 76-year-old RAF veteran from St. Austell, Cornwall, took part in a daring fundraising challenge – a wing-walk – raising more than £3,000 for the RAF Benevolent Fund and Cornwall Air Ambulance Trust…

David ‘Terry’ Earl raised money for the two charities by wing-walking – a stunt that involves standing on the wings of a plane during flight – at Bodmin Airfield in Cardinham, Cornwall. David spent 27 years in the RAF, starting out as a cadet at in 1961 and retiring as a Wing Commander in 1988.

Clocking up a total of 9,000 flying hours while serving, he flew Shackletons and Nimrods and commanded No. 201 Squadron 1983-1985. He has also been a civilian flying instructor for some 20 years.

RAF veteran David ‘Terry’ Earl said: “I wanted to do something a little different to celebrate my 60th year as a qualified pilot. Having spent the best part of three decades in the Royal Air Force, the RAF Benevolent Fund was a natural fit for my fundraising efforts.”

Heather Kemp, Regional Fundraiser at the RAF Benevolent Fund, commented: “We’re always humbled and impressed by the great lengths – or in this case, heights – that our fundraisers go to raise money for us. David’s generosity goes a long way in helping us reach and support members of the RAF Family, so on behalf of everyone here at the Fund – thank you.”