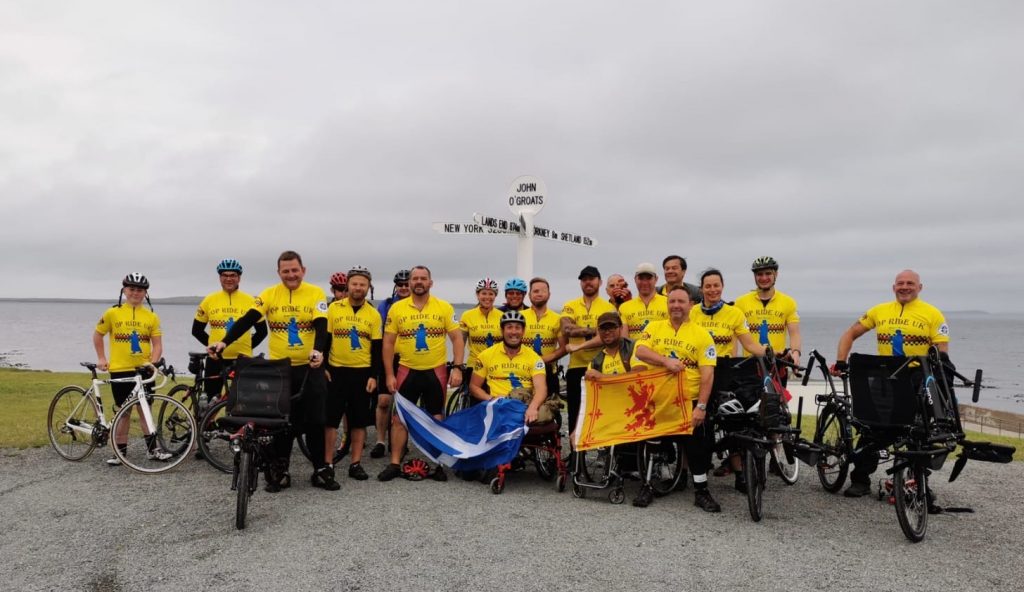 Ten amputee military veterans have joined firefighters to ride from John O’Groats to Lands’ End in support of a comrade with Motor Neurone Disease.

The nearly 1,000-mile challenge will take the team of veterans and emergency service personnel 13 days to complete, using push and hand bikes as well as specially adapted tandems. The operation will be a fund and awareness raising event for both Motor Neurone Disease and charity Pilgrim Bandits – who organise gruelling expeditions for injured service and emergency personnel, many of whom are amputees or have PTSD. With a no sympathy approach, Pilgrim Bandits’ motto is ‘Always A Little Further’ – pushing veterans beyond what they thought was possible to build confidence.

Pilgrim Bandits have teamed up to run the expedition, Operation Ride UK, with veteran and ex-firefighter John Chart. One year ago, John, 49, was diagnosed with Motor Neurone Disease (MND.)

Together with John’s team of ex-military and serving firefighters, the Pilgrim Bandits team left John O’Groats on August 10th. There will be gruelling challenges for the team to complete along the 13-day course. The expedition will be the first since lockdown was announced, and with many of the team having been shielding, they said they can’t wait to get started. The operation is being supported by another military charity – Vetrun180. Volunteers from Vetrun180, who are injured veterans themselves, will be organising logistics like preparing food and setting up camp for the riders.

John Chart was just 48-years-old when he was diagnosed with MND in July 2019. MND is a fatal and incurable neurodegenerative disease, with a life expectancy of three to five years of symptom onset. Six people a week die from the condition and another six are diagnosed. As a firefighter for 26 years, John said he was ‘devastated’ by the diagnosis but determined to fight it. He will be using a specially adapted tandem and will be riding with various companions including his 14-year-old son Christopher.

He said: “Motor Neurone Disease is a demonic disease. It is like an assassin; it sneaks up on you and it’s like someone’s got a remote control and it’s just closing my body down gradually. I want to raise awareness, I want to see the devastation of what it does to you, but I also want to say to people don’t ever give up. You’ve got to keep going. Don’t ever give up.”

John is determined to raise awareness of MND and has already received support from Sarah Ferguson, the Duchess of York, who posted a photo on Instagram of her wearing a ‘MND Warrior’ t-shirt in support of the challenge.

Joining the expedition with Pilgrim Bandits Patron is former Lance Corporal Tyler Christopher, who was injured in Afghanistan in August 2009 after standing on an IED bomb, which resulted in the loss of both his legs above the knee. He has taken part in several Pilgrim Bandits expeditions including a 500-mile kayaking challenge down the Yukon River in Canada. Tyler said that Pilgrim Bandits had ‘massively’ helped him to realise that he can still do things he loved to do before his injury, like wild camping.

He said training had been going well, adding: “I’m really looking forward to this challenge and seeing everyone on it. I’ve really missed the comradeship and the company as I was in lockdown in a very isolated area. I had my family around, but military friendships are different.”

CEO of Pilgrim Bandits, Matt Hellyer will be leading the expedition. He said: “We are proud to be riding with John – raising awareness and funds for MND and Pilgrim Bandits. Our motto is ‘Always A Little Further,’ because we know that pushing our team physically and mentally – when they have already endured so much – sees them rise above and beyond. We don’t do sympathy, but we offer camaraderie, an adventure and we believe in the power of humour over pain. And we are going to need all of that to overcome not only the 912 miles in 13 days, but the extra challenges awaiting the team along the way.”

You can follow the expedition progress via the Pilgrim Bandits Facebook page, Twitter and Instagram feeds and via John’s page Cycle Challenge for MND or on Instagram @cyclechallange4mnd. Donations can be made to Pilgrim Bandits via the Operation Ride UK Total Giving page HERE!