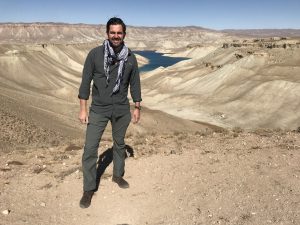 ROAD iD, the leading provider of wearable ID products, is thrilled to announce a partnership with best selling author and philanthropist Jordan Wylie.

“I am delighted to have partnered with ROAD iD, as an adventurer that is also diagnosed with epilepsy, I wear my ID band every day,” Jordan said.

Jordan is an extreme adventurer and former soldier with a passion for helping others through extraordinary charity challenges.

ROAD iD, which recently opened an office in the United Kingdom, proudly supports Jordan as he trains for his 2019 #RowingDangerously project – a world first attempt to solo row the gateway to the Gulf of Aden. The company donated a Concept2 indoor rower ahead of Jordan’s extraordinary journey.

“We’re excited to be part of Jordan’s Rowing Dangerously Project,” said CEO and Co-Founder Edward Wimmer. “At ROAD iD, we’re all about fuelling adventure while having a positive impact in the world – values we share with Jordan. It’s an honor to work with him as ROAD iD expands in the United Kingdom.”

The company started in 1999 after Wimmer was nearly hit by a truck while training for a marathon. Edward, along with his father Mike, set out to make a product that would easily identify people in emergency situations. Since then, the company has heard thousands of stories from customers who have used their ROAD iD in times of need. Countless people say they might not be alive if it weren’t for ROAD iD.