“Atten-shun!” Army Brings Back Changing Of The Guard At Buckingham Palace 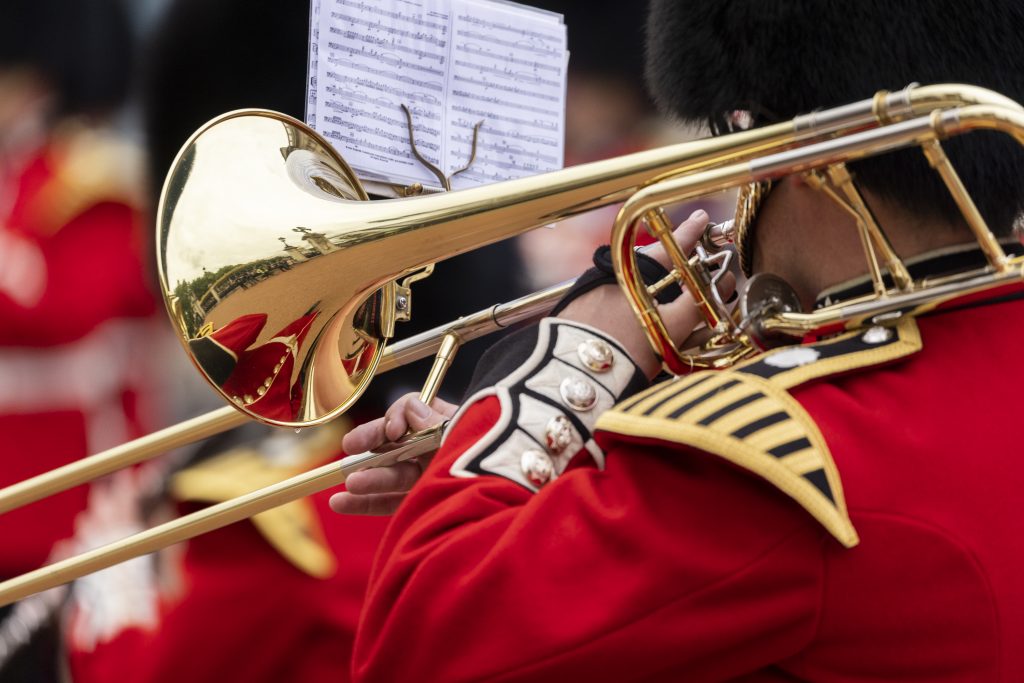 The full ceremonial Changing the Guard at Buckingham Palace returned recently after the longest pause in its delivery since WW2. Changing of the Guard is carried out by the nation’s finest serving soldiers and musicians, dressed, in its most iconic form as it was today, in red tunics, bearskin caps and mirror shined parade boots.

The event is considered the epitome of ceremonial excellence and regimental discipline, ranks top of the bucket list of every visitor to London and has become woven into the fabric of the UK’s national identity and brand.

Mounted and dismounted ceremonial sentries continued to be posted at all the Royal Palaces 24/7 all through the COVID-19 pandemic in London and Windsor, but restrictions meant the duties were handed over from one unit to another administratively, without any ceremony or music, after March 2020.

To strains of Spandau Ballet’s “Gold” and John Williams’ “Olympic Theme”, the colour, tradition, pomp and joy of London ceremonial was once more back with impeccable timing this morning. The return of the full Changing of the Guard ceremonial duty at Buckingham Palace, St James’s Palace and the Tower of London, is an historic moment for the capital and the UK. It signifies another step towards normality. The ceremony will now take place in London on Mondays, Wednesdays, Fridays and Sundays.

Number 3 Company from 1st Battalion Coldstream Guards based in Windsor had the privilege of undertaking the first full ceremonial duty since prior to COVID restrictions in March 2020. 80% of these guardsmen had never done Changing of the Guard before, as they joined the Army after COVID or have been involved in an operational role prior to taking up ceremonial duties. The Coldstream Guards is one of the Army’s oldest and most distinguished regiments and trained hard to make it an impressive sight that the Household Division and the nation could be proud of. They were accompanied today by the Band of The Coldstream Guards for whom similarly it was a proud moment.

Musician Lucy Burch from the Band of the Coldstream Guards said: “I was so excited to take part in my first changing of the guard ceremony with the band. It’s such a privilege to take part in ceremonial events and march proudly alongside my colleagues. Performing in public is always very special, I am looking forward to regularly entertaining people and being a professional ambassador for the British Army now that ceremony is back!”

Before he stepped off to take up his Queen’s Guard duties this morning, Guardsman Turner, who has recently transferred to the 1st Battalion Coldstream Guards said: “Despite spending 12 months in Number 7 Company, I’ve not conducted a usual Queen’s Guard before today, I’m really proud to be taking part in the first one back in the public eye. Hopefully my nerves don’t get the better of me on the day”.

His comrade Guardsman Cheesbrough said: “I am excited to take part in the first ceremonial Queen’s Guard in over a year.  We are well rehearsed an I am confident that everything will go smoothly on the day”.

Since March 2020, The Coldstream Guards has been involved in operational military training, deployments and supporting the NHS and other authorities during the COVID pandemic. These soldiers will deploy to the Falkland Islands in November where Support Company from the Battalion is deployed presently.

The return to full ceremony at Buckingham Palace represents the completion of what has been a phased return to state ceremonial and public duties. The Changing of the Guard at Windsor Castle resumed on Thursday 22nd July 2021 and now takes place on Tuesdays, Thursdays and Saturdays. In addition, the Changing of the Guard at Horse Guards by the Household Cavalry also has resumed fully.

Ceremonial duties are an important part of Army history and tradition. The Household Division provides both ceremonial and operational support to the Crown: soldiers from the Foot Guards have guarded the Sovereign and the Royal Palaces since 1660. The Changing of the Guard ceremony marks the moment when the soldiers currently on duty, the Old Guard, exchange places with the New Guard.

When Queen Victoria moved into Buckingham Palace in 1837, the Queen’s Guard remained at St James’s Palace, with a detachment assigned to guarding Buckingham Palace. This same arrangement remains today with the Colour (ceremonial flag) which accompanies the unit on Queen’s Guard, being stored and protected during that unit’s guard duty at St James Palace after every ceremony.

The iconic image of a soldier in a red tunic and bearskin hat is associated across the world with Great Britain. It is a reminder to the public of the close relationship between the Armed Forces and Her Majesty The Queen. The music provided by the Household Division Band that accompanies the ceremony is wide ranging, and includes traditional tunes, films, musicals and familiar pop songs. Designed to set the beat to keep the pace of the marching troops, it also inspires pride, passion and reassurance through its familiarity.

While the return of the ceremony is a great moment for the British Army, while the threat of COVID persists, we do not want to encourage large crowds. This is an event which tourists are attracted to and they are asked to take the appropriate measures to keep themselves and others safe. We would encourage the public to consider taking a rapid lateral flow test if they wish to travel to see the ceremony in person, just as they would before going to any major event or attraction. Please carry and use hand sanitisers whenever possible. We would encourage face coverings in busy areas to protect themselves and others. If anyone has any symptoms of COVID-19, they should not come to the Changing of the Guard.

FORMAT OF THE CEREMONY

At Wellington Barracks in Birdcage Walk, the New Guard and the Band form up. After being inspected at approximately 10:40am, the Band forms a circle and plays music while waiting for the arrival of the Regimental Colour (flag). When the New Guard is fully assembled, it marches out of the barracks towards Buckingham Palace.

At 10:30am a detachment of the Old Guard forms up in Friary Court, St James’s Palace (Marlborough Road), and is inspected by the Captain of The Queen’s Guard. This contingent then marches down The Mall towards Buckingham Palace preceded by a Band or Corps of Drums.

Meanwhile, the Buckingham Palace detachment of the Old Guard forms up in the Palace forecourt and is also inspected.

Now complete, the Old Guard awaits the arrival of the New Guard from Wellington Barracks.

The New Guard enters Buckingham Palace forecourt at approximately 11:00am through the North Centre Gate. It marches in front of the Band and halts to face the Old Guard.

The Band then plays the New Guard’s Regimental Slow March as it advances towards the Old Guard. The Old Guard and New Guard then ‘Present Arms’ (salute with their rifles) after which the Captain of the Old Guard hands over the key to the Palace. This symbolic gesture represents the transfer of responsibility for the Palace’s security.

Officers of both the Old Guard and New Guard salute the Senior Captain on parade with their swords. Retiring to the Guard Room, they will later report to the Senior Captain after completing handover procedures. During this period the Ensigns, carrying their respective Colours, patrol the length of the forecourt from left to right. Officers not directly involved in the ceremony will patrol between the Palace and both Guards.

As each new sentry is posted, a Lance Corporal distributes any special orders previously collected personally from the Palace by the Captains of the Guard. During these procedures the Regimental Band, originally accompanying the New Guard, moves to the centre of the forecourt, forms a semi-circle and plays a programme of music.

The original sentries, having been replaced by those from the New Guard, return to complete the Old Guard. The duty Drummer informs the Director of Music that the handover is complete. The Band then re-forms in front of the Centre Gates.

At approximately 11:35pm the Guards re-form and are called to ‘Attention’. The Old Guard advances to its Regimental Slow March towards the New Guard. The Old and New Guard exchange compliments as the Old Guard exits through the Centre Gate preceded by the Band. Having left the Palace, the Old Guard ‘breaks into quick time’ and continues its march back to Wellington Barracks.

When The Sovereign is in residence, the Royal Standard is flown from the Palace. Upon such occasions, the Foot Guards on the forecourt of the Palace will wait for the Household Cavalry Mounted Regiment to pass by on their way to change the Queen’s Life Guard at Horse Guards and will ‘Present Arms’, as the horses pass between The Queen Victoria Memorial, affectionately known as the ‘Birthday Cake’, and Buckingham Palace.

The New Guard remaining in the Palace is given the order to ‘Slope Arms’. The detachment then divides into two. Those responsible for guarding St James’s Palace, usually led by the remaining Band or Corps of Drums, march off down the Mall to place the Regimental Colour in the Guard Room at St James’s Palace. The Buckingham Palace detachment then retires to the Palace Guard Room to assume its duties.