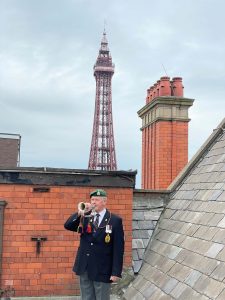 Blackpool marked the start of Armed Forces Week today (Monday 21 June) with the raising of the Armed Forces Day Flag above the Town Hall.

The resort joined 10 Downing Street, other local authorities and military associations by raising the flag to show support for our servicemen and women. As a result of COVID restrictions, the ceremony was shown on VisitBlackpool social media channels.

It marked the start of a series of events, some of them in virtual format, to celebrate Armed Forces Week.

These include a service of dedication at Fylde Memorial Arboretum on Moor Park Avenue, Blackpool, at 11am on Friday 25 June.

Founded by Don Aiken, a D-Day Veteran and located in the fields next to Moor Park school, the Arboretum stands as an area of remembrance that provides the service associations, and the people of Blackpool and the Fylde, a place of peace and beauty in which to remember their fallen comrades and loved ones.

As part of Blackpool Armed Forces week, the Fylde Ex-Service Liaison Committee will host a service of dedication at the centre of the Memorial Arboretum’s Glade area. The event this year will be strictly by invitation only. Those wishing to visit the Arboretum and memorials on the day may do so after the event.

National Armed Forces Day on Saturday 26 June will be marked at the Hangar 42 Spitfire Visitor Centre at Blackpool Airport.

Hangar 42 was constructed in 1939 for the Royal Air Force and has been relatively untouched since 1945, retaining many original features.

The Visitor Centre has been developed to ensure that the sights, sounds and equipment of the era are brought back to life to give visitors a valuable insight into the realities of fighting on the ground, as well as in the air during the dark years of World War Two.

The open day is a free event which will take place between 10am and 4pm with tickets bookable in advance here.

It will feature three replica Spitfires and a Hawker Hurricane currently being restored with original parts. Some additional activities such as Bomber Command Virtual Reality Suite are chargeable extras.

RAF Squires Gate was home to many of the Polish RAF squadrons in WW2, many being formed in Blackpool. The Polish Heritage Flight’s fully operational Spitfire BM597 adorned in the Squadron markings of P8331 “Sumatra” will be visiting and able to view at the hangar over the weekend as part of the 80th Anniversary of the loss of Acting Wing Commander Piotr Laguna and Spitfire P8331.

Children can also get involved through some special activities on the VisitBlackpool.com website. There are colouring sheets available to showcase the importance of veterans and our Armed Forces. All you need to do is download and print.

There is also opportunity to view a special war-time cinema experience created especially for local primary school children. The education film will show pupils from Years 5 and 6 what happened in Blackpool during WWI and what it was like for children during WWII, showcasing archive video footage and images. This footage can be viewed here.

Cllr Lynn Williams, Leader of Blackpool Council, said: “It is a shame that COVID restrictions have once again prevented us from doing everything we would normally do to pay tribute to our servicemen and women during Armed Forces Week.

“We hope that the mix of virtual and physical events that we have created will enable people young and old to both celebrate and commemorate the remarkable dedication to duty by our Armed Forces.”