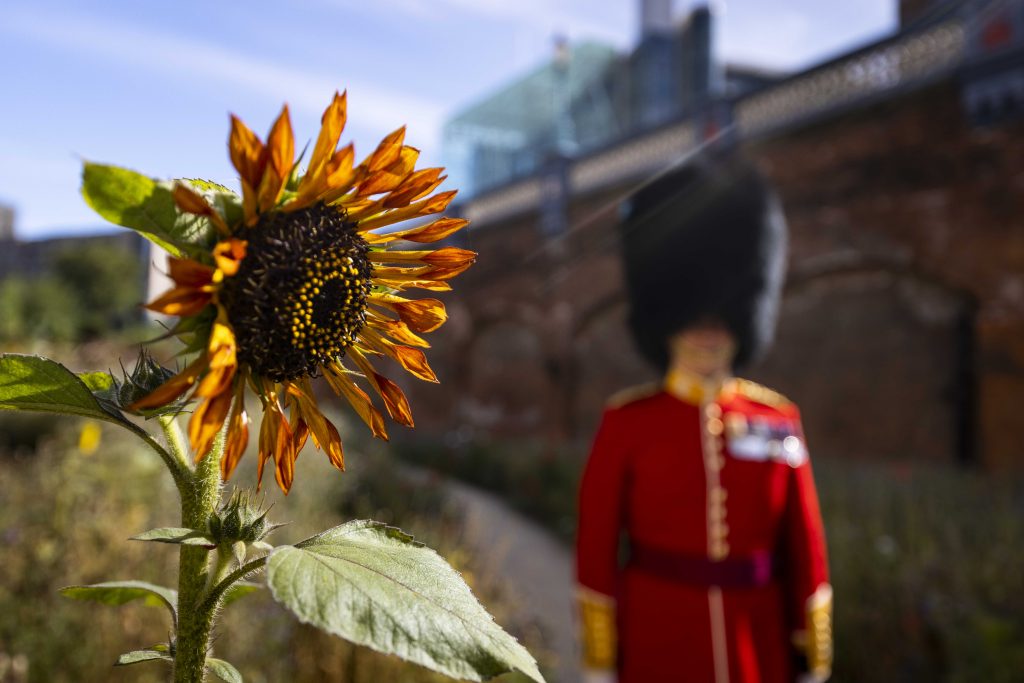 Prior to this summer practically the only flora on daily show at the Tower of London moat were the embroidered shamrock, leeks, thistles and roses on the uniforms of the Tower Guards as they carried out their patrols. But now the moat is bursting with a breathtaking ‘Superbloom’ of jewel coloured real wildflowers and the British Army is proud to have witnessed every stage of the dramatic metamorphosis.

‘Superbloom’ is part of a long-term project that will transform the Tower of London moat into a new natural landscape, bringing biodiversity to the City of London. It’s not just aesthetic. Recent studies have shown that in the UK countryside honeybees now have to fly up to three miles a day in search of food, and in the city they need to fly a minimum of seven miles a day because nectar producing plants are so scarce here.

Now the Tower of London is buzzing with thousands of happy, busy bees and pollinators feasting on the man-made meadow. “We haven’t introduced any beehives” said Head of Projects Rhiannon Goddard, from Historic Royal Palaces, “We didn’t need to, there’s plenty of bees in London but they are starving so those numbers aren’t going to remain for long. Simply by planting the flowers, we just laid the table and the hungry bees just came!”

Irish Guards Captain Ryan Robinson, 44, from Armagh whose soldiers have been providing the Tower of London Guard this month said: “It’s a great thing that Historic Royal Palaces are doing, feeding London’s bees. Bees are crucial to help pollinate flowers and vegetation. In the UK we need them to ensure there’s enough food not just for us but every part of the ecosystem. Without everyone giving them a helping hand the entire ecosystem would quickly be in collapse and that has a knock on to how we all live our lives.”

It’s thanks to Britain’s most famous General and Head of the Army, the Duke of Wellington of Waterloo fame, that the Tower moat is able to become the setting today for what is being called “a royal banquet for bees”.

For centuries the moat was a flooded extension of the Thames. But between 1843 and 1845, an outbreak of a deadly infection caused by poor water supply at the Tower was linked to the ‘obnoxious smell’ and ‘putrid animal and excrementitious matter’ of the muddy moat when the tide was out.

The Duke of Wellington ordered that the moat was drained and turned into a defensive dry ditch, or ‘fosse’ and it has remained dry ever since. It has been an allotment during the Second World War, providing food during rationing; and most recently was filled with poppies and then flames for the centenary commemorations of the First World War, but these were temporary adjustments to an otherwise plain expanse.

Earlier this year, while the Tower of London Guards carried out their daily duties, 20 million seeds were sown in the Tower’s dry moat, to create ‘Superbloom’ – a floral display and haven for wildlife, surrounding the famous fortress. Now the tightly mown grass banks are a rich and verdant meadow of wildflowers which is rapidly changing the ecosystem at the heart of London’s capital, and this time it’s permanent. Like the Queen’s Green Canopy, it’s a fitting and lasting legacy for HM The Queen’s Jubilee.

The men and women of the Tower Guard have enjoyed the constantly changing scene as they carried out their nightly patrols of the Tower Moat as the Superbloom began to develop. Captain Robinson said “We’ve a job to do, and that’s to focus on making sure everything’s secure here at the Tower, so we try not to get distracted by the flowers when we’re on duty. But the soldiers will come and walk around on their breaks.”

The Irish Guards’ brilliant blue plumes in their bearskin caps and their scarlet tunics would once have popped in contrast against the Tower’s ancient stones, but they have some serious competition now with the swathes of colourful flowers.

The ultraviolet Vipers Bugloss is the most popular flower for bees. It’s rich in nectar, as are all the plants that have been selected for the Superbloom. 15 different seed mixes have been sown in the moat, and a breathtaking 29 species of flowers have started bursting into life – a process that will last over several months. The flowers are providing a rich source of food and nectar for pollinators, bringing more and more biodiversity to the Tower’s urban surroundings. Familiar wildflowers have begun to appear in profusion, from red Poppies, to yellow Corn Marigolds and blue Cornflowers. In addition to the wildflowers, a range of garden plants heighten the colour effects and extend the season of flowering, with Sunflowers, Cosmos and Rudbeckias flowering into early autumn.

Walking through the flowers is a transformative experience made richer by an ambient score that plays throughout the day: ‘Music for Growing Flowers’, by contemporary composer Erland Cooper, and magical lighting effects in the Summer evenings.

Just like the bees, The Tower Guard have a very important job to do protecting all our futures, and are endlessly busy. When they aren’t guarding the Crown Jewels and the Tower they are training for or deploying on operations. Soldiers will spend most of their lives working in the great outdoors so develop a very healthy respect for nature. While their main role is defending the UK and its interests at home and overseas, that role is constantly evolving and becoming increasingly sustainable.

Captain Robinson said: “As we move further into the 21st century it’s more apparent we need to look after the world we live in as well as the people that live in it.”

He added: “The Irish Guards are off overseas on deployment in October on Operation Corded to protect African wildlife from poaching and combat the global illegal wildlife trade, but it’s good to know that as part of the Tower of London Guard we’re playing a small part in protecting vital wildlife here in the UK too.”