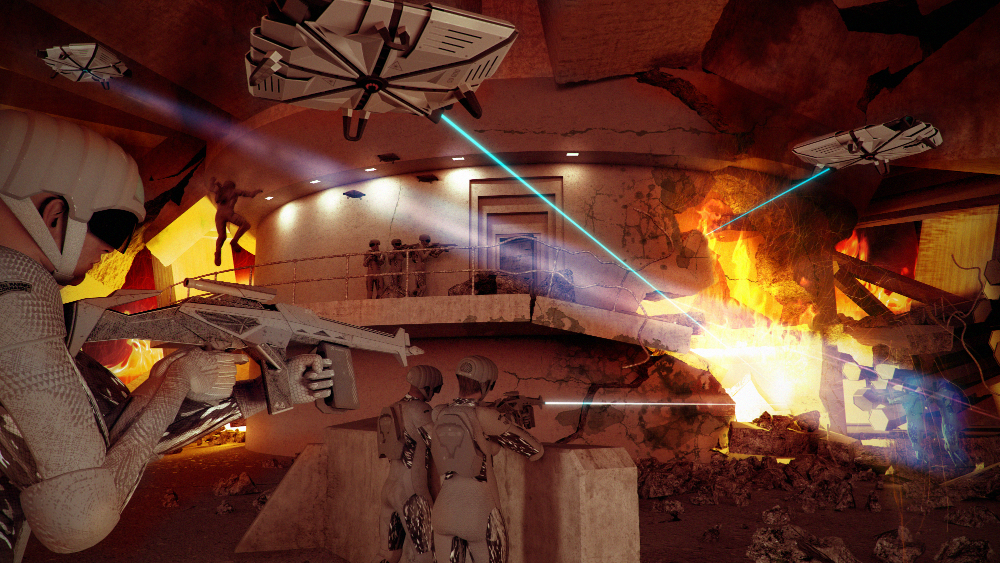 Bionic ‘invisible’ commandos carried into battle on silent ‘flying wings’ while hologram decoys distract an enemy pounded by rail and laser guns.This is the futuristic vision of the Royal Marines dreamed up by Britain’s best and brightest young engineers, told to harness present and future tech to imagine how the Royal Navy’s elite troops might go into action in the future…

Young engineering graduates from the UK Naval Engineering Science and Technology forum, representing nearly a dozen leading defence, technology and engineering firms, were asked to plan a mid-21st Century assault by Royal Marines on an enemy missile site perched on a clifftop.

They came up with a string of ideas – many previously confined to the realm of science fiction:

Defence Secretary Ben Wallace said: “It is tremendous to see the pioneering visions of young British engineers push the boundaries of technology and conventional thought. As global threats continue to evolve and become more complex, it is vital that we encourage our armed forces and industry to work together to ensure our fighting forces strengthen their operational edge.”

The graduates spent a day at the Commandos’ Training Centre at Lympstone near Exeter to understand what it takes to become a Royal Marine, some of the current equipment used and the challenges faced on real-life operations.

The engineers were then given the raid scenario and thrashed out ideas, looking at what troops would be equipped with, how to get them ashore from ships over the horizon, how the Marines would neutralise a protected target, how they might protect themselves and distract the enemy.

Chad Swaby came up with the idea of contact lenses with thermal imaging ability and artificial intelligence which can differentiate between civilians, enemy soldiers and hostages – from the way they move. “We can use that information to let Marines know who they need to target and who they need to save. The whole event has been a great opportunity for us to see what commandos do, what they have to go through.”

Major General Matt Holmes, Commandant General Royal Marines said: “The Marines form over 40 per cent of Britain’s special forces and are seen as the tip of the spear. Our objective has been to envisage radical capabilities to make us more agile and lethal, while being able to operate in a complex digital and networked future environment.

“We can’t say how much or how quickly the reality of these visions will come to fruition. But what we can say is that if only 20 per cent of these ideas come to reality then we will be at the cutting edge of tomorrow’s technology.”

Major Matt Perks, the Royal Marine behind the brainstorming project, said: “The Royal Marines have always prided themselves on thinking differently, but we know we don’t have all the answers when it comes to designing the Future Commando Force, so working with these incredibly talented young engineers was a chance to push the conceptual boundaries of amphibious warfare in ways we hadn’t considered.”