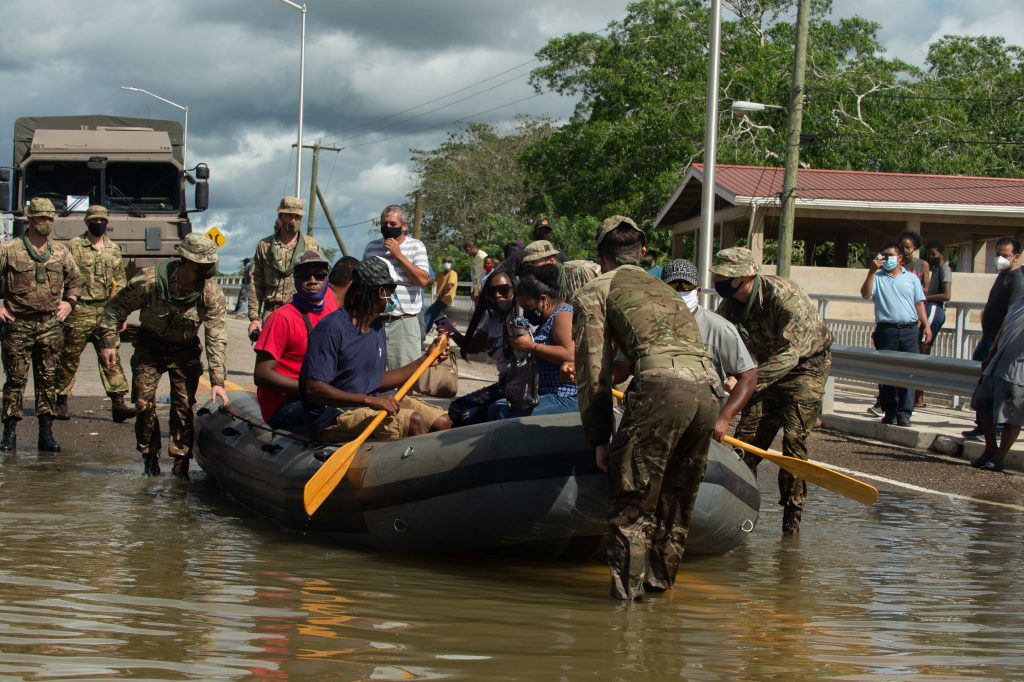 More than 80 British Army soldiers currently deployed on a training exercise in Central America have seized the opportunity to support the Government of Belize as they provide aid and rescued stranded locals in the aftermath of Hurricane Eta.

After receiving a request for aid from the Belize government, commanders planned a rapid deployment on 7th November 2020 to rural areas cut off by the heavy rains.

Lt Col Simon Nichols, Commander BATSUB, said: “It is not wasted on me that we are guests in this beautiful country and when our hosts ask and need a little support, it is great to be able to lean-in and assist. Hurricane Eta, the torrential rains and subsequent floods that followed have impacted so-many people across the region. Like the motto of our Belize Defence Force (BDF) colleagues, we stand “Shoulder to Shoulder” with them as we bring some relief to a beleaguered population.”

The British troops are deployed on Exercise Mayan Warrior, to learn how to survive in the harsh and demanding conditions of the jungle. Adaptable and always ready for a challenge, The Royal Dragoon Guards have quickly switched focus to plan their support to the Belize Defence Force. The team on the ground have analysed the risks and conducted extra training to prepare for the demands of the rescue effort.

Lance Corporal Batchelor, aged 34, said: “For me to help with what we’re doing, makes me feel quite proud. To give them food and water when they can’t get to it themselves.”

The global Covid-19 Pandemic presented challenges but the troops abided by the Force health protection measures throughout, wearing face coverings and washing their hands frequently, while maintaining social distancing as much as possible to protect both Belizean nationals and themselves. Before deploying to Belize, all soldiers tested negative and entered isolation to protect themselves and the population of Belize from the virus.

Major Chris Roberts, Officer Commanding A Squadron The Royal Dragoon Guards, said: “We are proud to have the opportunity to work with the BDF as they work to provide humanitarian aid to the people of Belize affected by the flooding.

“I have been impressed by the enthusiasm shown by our soldiers in helping our Commonwealth partners after Hurricane Eta” he said. “We are extremely happy to be in a position to offer support and help Belizeans recover from adversity.”

The British Army has a long-standing relationship with Belize, assisting with the disaster relief will only strengthen the bonds between our two nations.

“When disaster strikes, the UK Armed Forces are a force for good. I am proud that our highly adaptable military were able to react quickly to Tropical Storm Eta and provide humanitarian and disaster relief support to the people of Belize.”