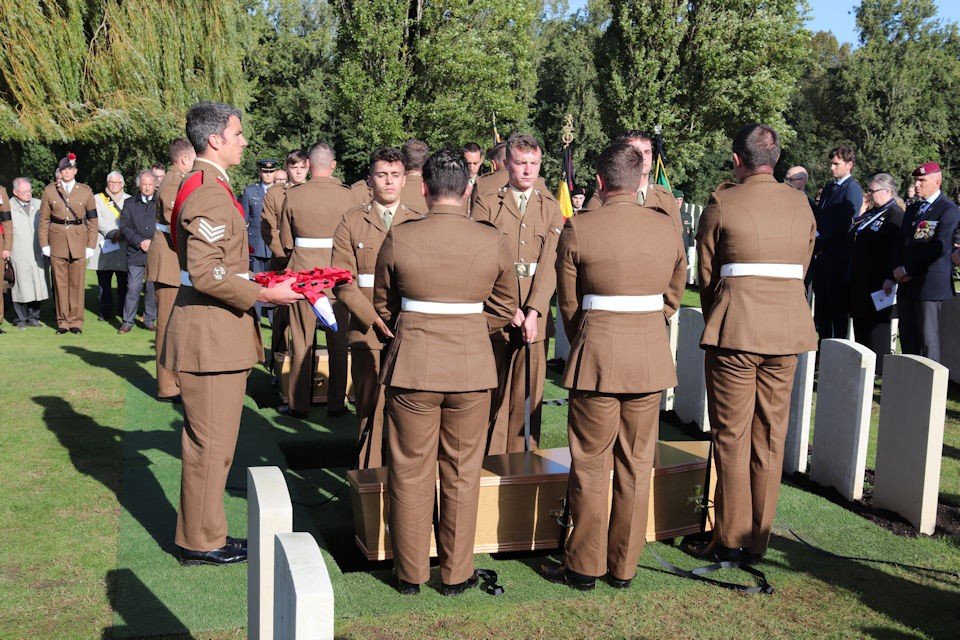 A burial service has brought closure to a crowdfunded archaeological project that discovered 110 previously missing soldiers, thirteen of whom, all from Commonwealth nations including the UK, were interred side by side at a ceremony at the Commonwealth War Graves Commission’s Wytschaete Military Cemetery, near Ypres…

The service, conducted by Father Patrick O’Driscoll, Chaplain to the 1st Battalion The Royal Regiment of Fusiliers, was supported by present-day serving Fusiliers from the Regiment who formed the bearer parties and a firing party. The casualties were interred in three coffins, with three Commonwealth War Graves Commission’s (CWGC) headstones marking their collective final resting places.

Two coffins each contained one unknown soldier with a third containing the partial remains of 11 unknown individuals. In keeping with burial tradition, the casualties were interred together, ensuring that those who served and died together, are buried and commemorated together.

Father O’Driscoll, Chaplain to the 1st Battalion The Royal Regiment of Fusiliers, said: “We come together today to remember and thank these men for their great sacrifice in fighting and dying together as one. Even though we do not know their names, we remember their humanity and courage and that even in the hell of battle they were there for each other even to death.”

The funeral service was organised by the Ministry of Defence’s Joint Casualty and Compassionate Centre (JCCC), known as the ‘MOD War Detectives’, who also try to make an identification when British remains are found. Due to the heavy nature of the fighting in this area during the war, it has not been possible to identify the individuals by name on this occasion.

Rosie Barron, from the JCCC, said: “It has been a privilege to organise this service today alongside The Royal Regiment of Fusiliers. Although these men were not identifiable, their sacrifice will not be forgotten. They have now been given the burial service they deserve and will rest alongside their comrades in perpetuity.”

The service formed one of the final chapters to the ‘Dig Hill 80’ project that discovered their remains in 2018. The project led a 1.1 hectare crowdfunded archaeological excavation, which took place at the former site of Hill 80 in Wytschaete, that had been allocated for future housing development.

Hill 80, in the village of Wytschaete, was formerly the site of a windmill before the First World War, it became an entrenched German gun position following the village’s capture in 1914. The location afforded observational advantage to the Germans as it overlooked the town of Ypres and formed part of the Messines Ridge.

The site remained in German hands until the Battle of Messines in June 1917 when it was recaptured. In 1918, Hill 80 was again taken by the Germans during the Battle of the Lys, before finally returning to Allied hands in September 1918.

Dig Hill 80 Head Archaeologist Simon Verdegem said: “It is now about a year since the investigation into the soldiers of Hill 80 was completed. Thanks to massive international support from individuals and organisations, enough money was raised through crowdfunding to make a detailed excavation possible. The aim was not only to excavate the trenches but also to recover the soldiers.

“Now, the British and German soldiers will finally be given a definitive and dignified resting place along with their comrades. I dare to believe that it gives them peace, knowing that people from all over the world have joined forces to recover their mortal remains. In my opinion, this can count as a symbol of peace and reconciliation.”

The graves will now be marked by headstones provided by the CWGC, who will care for their final resting place in perpetuity.

Victoria Wallace, Director General CWGC said: “It is always moving and a real privilege to attend reburials and it’s a credit to the team who excavated Hill 80 that they have recovered these men at last, who will now be laid to rest with former comrades, and cared for in perpetuity by the Commonwealth War Graves Commission.”