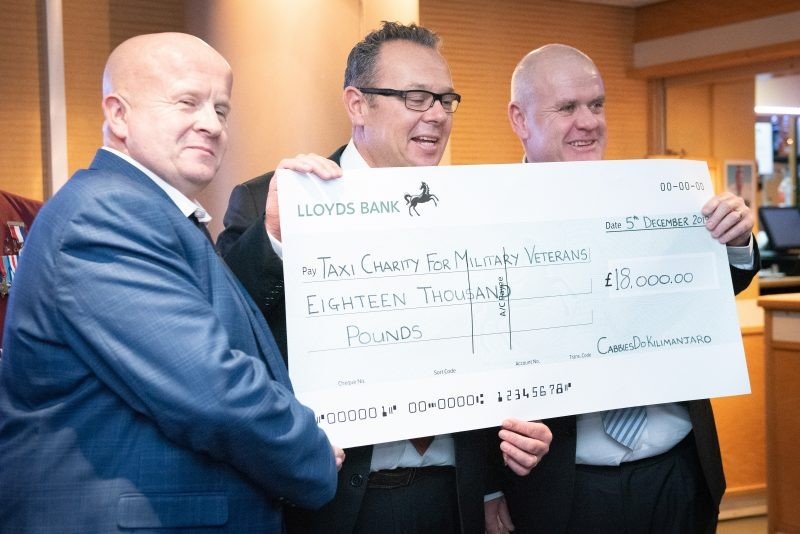 After a yearlong epic fundraising challenge to lose weight and get fit, before attempting the gruelling ascent of Kilimanjaro, three London cabbies, Daren Parr, John Dillane and Brian Heffernan, presented a cheque for £18,000 to the Taxi Charity…

The idea to climb Africa’s tallest mountain all started from an innocuous tweet asking fellow cab drivers if they wanted to lose weight and improve their lifestyle by training to climb the formidable highest mountain in Africa, Kilimanjaro, while raising money for the Taxi Charity for Military Veterans.

In September 2019, after a year training for the challenge and shedding almost 12 stones, John and Daren reached the summit after a six-day climb – (sadly Brian was turned back by the medical team on the final day of the ascent).

On 5 December at the Taxi Charity for Military Veterans Christmas Lunch, the proud London Cabbies presented a cheque for £18,000 to support the work the charity does to support veterans from all conflicts. When asked what this challenge meant to him, London cabbie Daren Parr said:

“Reaching the summit of Kilimanjaro, donating such an amazing amount to The Taxi Charity, and raising the profile of London black taxis makes me so proud. The Cabbies Do Kilimanjaro are delighted to have raised £18,000 for such a brilliant cause and we would like to thank all those people who have supported us over the past year.”

In September 2018 a tweet was sent to fellow London cab drivers asking if anyone wanted to lose weight, improve their fitness, change their lifestyle and climb Kilimanjaro to raise money for the Taxi Charity.