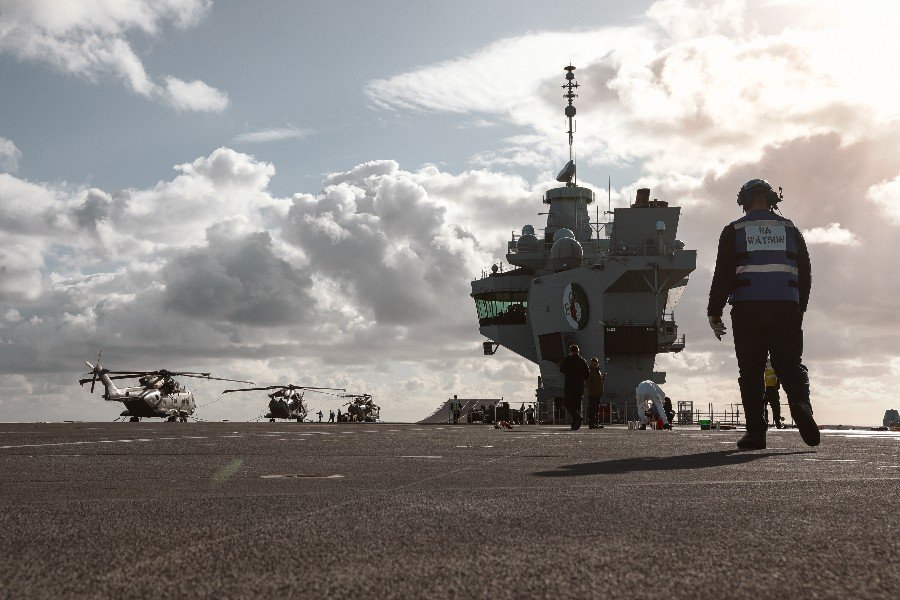 The 65,000-tonne warship, the biggest ever built for the Royal Navy, will be joined in harbour by other ships from the UK Carrier Strike Group who are on a deployment called ‘Westlant 19’. The main purpose of the deployment is to conduct Operational Tests with UK F-35B Lightning II Joint Strike Fighter jets for the first time, off the east coast of the USA.

The carrier has made Canada her first port of call, since crossing the Atlantic from her home port of Portsmouth, in a demonstration of the high regard in which the UK holds its close relationship with its fellow Commonwealth nation.

Welcoming the carrier as she prepares to anchor south-east of George’s Island in Halifax Harbour, Commander of the Maritime Forces Atlantic, Rear Admiral Craig Baines, Royal Canadian Navy said: “The Royal Canadian Navy and the sailors of Maritime Forces Atlantic are pleased to welcome and host one of our oldest allies to our home station of Halifax.

“This week’s visit represents a meeting of the old and the new – emphasising the Royal Navy’s historical ties to one of Canada’s oldest ports and providing the opportunity for the Royal Navy to showcase their newest capability. Our Navies have been operating side-by-side for over a hundred years and this visit highlights our unique relationship as well as our continued cooperation and interoperability.”

The HMS Queen Elizabeth Carrier Strike Group includes destroyer HMS Dragon and the tanker RFA Tideforce, both of whom also arrive in Halifax today. They will be joined when they return to sea, by frigate HMS Northumberland which is currently taking part in Exercise Cutlass Fury, a Canadian forces-led multi-national, joint maritime exercise designed to promote and enhance regional cooperation in the Atlantic, involving 20 ships and 36 aircraft.

Heading up the Carrier Strike Group is Commodore Mike Utley, Royal Navy, who said: “I am delighted to be bringing the UK’s Carrier Strike Group – and in particular the Royal Navy’s future Fleet Flagship – to one of our closest and most significant Commonwealth and NATO partner nations. We have a rich maritime history with Canada, and so it is fitting that HMS Queen Elizabeth’s second ever international visit is to Halifax.

“Our navies are so closely aligned in our approach to the global threats we face. The benefit of training together, such as HMS Northumberland is currently doing during Exercise Cutlass Fury, ensures we are ready to outmatch the testing global maritime threats we face. I know this close relationship will grow and endure for centuries more to come.”

The task group has used the two-week Atlantic crossing to hone numerous skills – including the marines of 42 Commando practising ‘vertical assaults’ by roping on to the carrier’s huge flight deck from their Merlins, and the first ‘rapid refuelling’ of Queen Elizabeth mid-ocean.

Her accompanying tanker is fitted with not one but two probes on her fuel lines, allowing double the amount of fuel to be delivered into Queen Elizabeth’s cavernous tanks in the same time as conventional refuelling operations.

The US Marine Corps will also conduct trials with their F-35Bs onto HMS Queen Elizabeth during the trials. The operational tests follow developmental tests conducted with F-35B trials jets from the USA last year.

HMS Queen Elizabeth and her carrier strike group will deploy operationally for the first time in 2021 with both UK and USMC squadrons embarked.