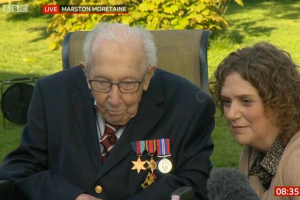 He has done it!

Captain Tom Moore, a 99-year old veteran from Bedfordshire has completed his challenge to raise money for the NHS during the COVID19 outbreak.

This morning he competed the task after walking 25 metres for the past week, with the total money raised at the time of writing standing at an incredible £12.3M – some 2223% increase on what the veteran hoped to achieve.

Health Secretary, Matt Hancock MP said Captain Tom was “an inspiration to us all”.

Mr Hancock told BBC Breakfast, “I saw the video a little while ago, and I was just inspired. Captain Tom has served his country in the past and he’s serving his country now, both raising that money for the NHS, for which I know NHS Charities are going to be incredibly proud and grateful, but also for cheering us all up.”

Speaking to the BBC about smashing his target, Captain Tom added, “I think that’s absolutely enormous.”

Well done and congratulations Captain Tom from us all at Pathfinder International magazine.

You can still donate to Captain Tom’s fund and raise even more for the NHS by clicking the link – https://www.justgiving.com/fundraising/tomswalkforthenhs

You can also send Tom a 100th birthday card for April 30 by checking out this link and how you can do it here.