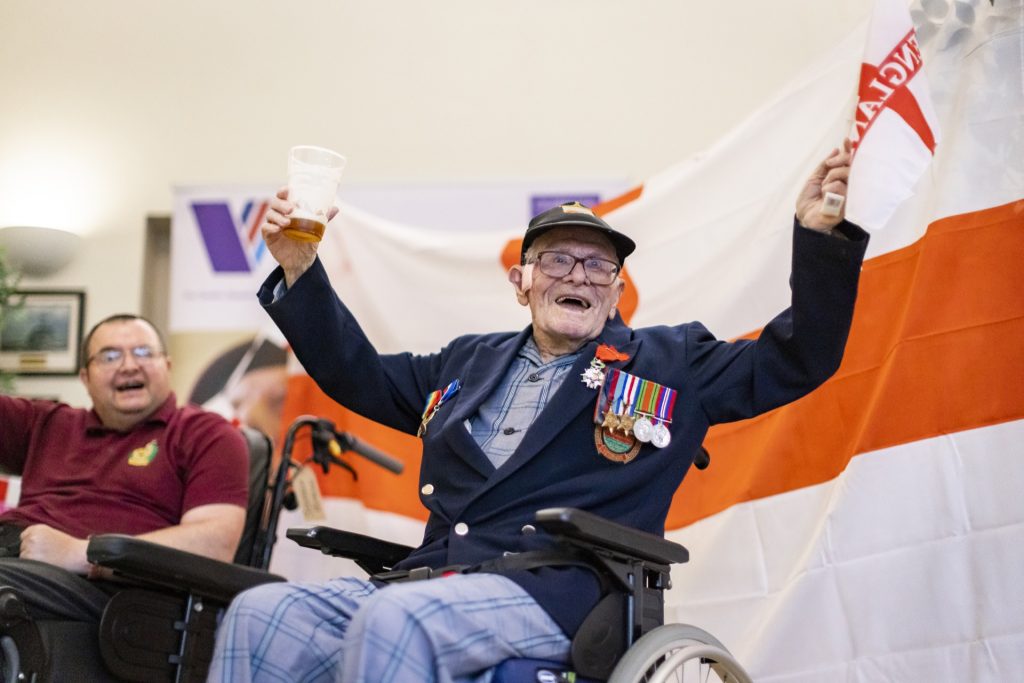 Former Royal Engineer, Steve Boylan, and Normandy Veteran, Len Gibbon, celebrate England’s win vs Denmark in the Euro semi-final with other residents and staff at Care for Veterans in Worthing last night.

Originally from Elephant and Castle in London, Len joined the Royal Army Service Corps as a Despatch Rider when he was just 20 years old. In early June 1944, Len got married and four days later he was posted to Normandy as part of the Normandy Landings. He arrived on the 14th June, eight days into the operation. He explained, “You had to climb down this rope netting which hung down the side of the boat. Each of us was carrying a pack of ammunition on our back which weighed pretty much the same as you. Then when we got down to a certain point, someone shouted ‘Jump!’ and you had to fall backwards, someone caught you and pushed you onto the smaller landing craft to take you to shore.”

Warrant Officer, Steve Boylan, was born in Southampton in 1975. From a young age he wanted to follow in his father’s footsteps and be a soldier, joining the Royal Engineers at 17 years old.

His first posting abroad was to Kosovo as part of the peacekeeping force. Looking back, Steve says, “At 17 I could not vote or legally drink alcohol but was given a gun and went to dangerous places. I loved being a soldier and was excited to be in Kosovo where British soldiers were well respected. However, I was very young and on reflection it was very dangerous.”

After three years in different hospitals and rehabilitation centres, Steve arrived at Care for Veterans in December 2018. He came there to be with other veterans and because of the wide range of rehabilitation available to him. Steve says, “I love it here as we all share a common background. The physiotherapy is the best I have ever had – they give me goals to achieve and work me hard and my sons say they can already see a difference. Most importantly, the staff here have given me a new determination.”  Steve’s dad, Peter says, “Coming to Care for Veterans was the best thing to happen to Steve. For the first time we’ve seen a real change in his mental attitude and now have hope for his future. As parents who share this difficult journey with our son, we have also been greatly helped by the staff here. Pauline was fantastic with Steve’s admission, helping us fill in forms and supporting us every step of the way – we’ve never had help like this before.”

After just a few months there Steve says, “This is the best place I have been and there’s nothing I don’t like here. The food and location are great and the staff have really taken the time to get to know me as an individual. They even appreciate my strange sense of humour! They also make simple but important things possible – last week they helped me take my 10 year old son, Albert, shopping. It was fantastic because for the first time in three years, as I was able to be a dad again and do what dads do.”

Before coming to Care for Veterans, Steve was depressed and not making progress but the physiotherapy sessions are already making a difference and in time, speech therapy will improve his speech. Steve says, “Care for Veterans have given me a new mindset and the determination to succeed with my recovery. My goal is to get out of my wheelchair on my own and walk five steps before Christmas. I am determined to do this as I now appreciate that tomorrow is the first day of the rest of my life…”

It is only with the support of grant-giving organisations, such as ABF The Soldiers’ Charity, that Care for Veterans are able to help our ex-Army veterans like Steve. They were extremely grateful for their support in 2018/19.

Care for Veterans is a UK charity which provides care and rehabilitation for disabled ex-service personnel and their immediate families. The majority of residents at its 60-bed facility in Worthing have an Acquired Brain Injury (ABI) or a degenerative neurological condition, such as multiple sclerosis, motor neurone disease and Parkinson’s.