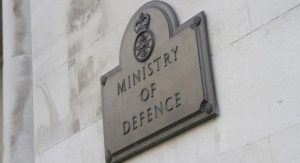 Lieutenant-General Jim Hockenhull looks to the future, outlining the changing character of the threat and the role of UK Defence.

In the first ever media briefing at Defence Intelligence’s Cambridgeshire base, Lt Gen Hockenhull has said that the shifting global picture has changed the character of warfare in ways that will challenge the West to keep pace with adversaries who do not play by the rules.

Global players such as Russia and China continually challenge the existing order without prompting direct conflict, operating in the expanding grey-zone between war and peacetime.

Conflict is bleeding into new domains, such as cyber and space, threatening our cohesion, our resilience and our global interests.

Chief of Defence Intelligence, Lieutenant-General Jim Hockenhull said:
“Whilst conventional threats remain, we have seen our adversaries invest in Artificial Intelligence, machine learning and other ground-breaking technologies, whilst also supercharging more traditional techniques of influence and leverage.
As we have seen in Salisbury, hostile states are willing to take incredible risks. We must make sure that we have both the intent and the capability to ensure that such wanton acts of irresponsibility will not go unpunished.”

Traditionally more comfortable in the shadows, Defence Intelligence [DI] have been brought to the fore by recent developments. Tasked with watching for global instability, tracking threats to the UK and monitoring human rights violations, amongst other things, analysts at DI provide advice to senior officials, shaping the Government’s approach to emerging threats and supporting UK forces deployed across the globe.

DI are already well placed to make this shift. Operating the world’s only fully integrated TOP SECRET collaboration centre, they are already working closely with 5 Eyes partners and other allied intelligence agencies.

Moreover, in their support to the Coronavirus response, they have already proved their agility and adaptability when faced with new challenges. Possessing the UK’s sole strategic medical intelligence capability, they rapidly shifted focus the Covid Assessment Team, or CAT. This moved their analysts from tasks such as assessing the UK’s overseas medical capabilities and understanding bio-hacking, to assessing the current and future threat posed by COVID-19.