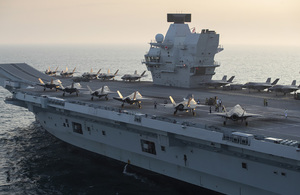 Chief of the Defence Staff, General Sir Nick Carter, has hosted a meeting of the Dragon Group onboard HMS Queen Elizabeth.

The Dragon Group, named after its first meeting aboard HMS Dragon in 2018, is a regular meeting of Defence Chiefs from the Gulf and wider Middle East region.

The Dragon Group meeting highlights the importance of the UK’s relations with countries in the region. The UK is committed to working alongside our partners to secure a more stable and safer world.

Today’s Dragon Group meeting aboard the HMS Queen Elizabeth was a tremendous opportunity to engage with our Middle East partners and discuss issues of mutual concern.

The UK Armed Forces truly value our partnerships in the region and we continue to work with them to help them improve regional security, stability and prosperity.

HMS Queen Elizabeth is on her maiden operational deployment, leading the Carrier Strike Group. Its presence in the Middle East demonstrates our commitment to bolstering regional security and stability.

A stable and prosperous region is beneficial to both the UK and the rest of the world.

The UK’s military and security partnerships in the region are strong and long-standing. Defence routinely has over 1,000 military personnel deployed in the region, in addition to aircraft and ships. Our Defence partnerships help us mount counter-terrorism, anti-piracy and counter-smuggling operations that keep everyone safe.

This will be General Sir Nick Carter’s last Dragon Group meeting before handing over to his successor as Chief of the Defence Staff, Admiral Sir Tony Radakin.