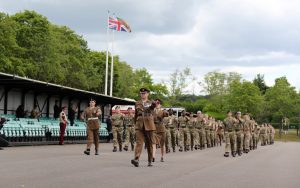 Colonels, brigadiers and generals who leave the Army are more likely than lower ranks to find high-quality civilian work, a conference on work and employment has heard.

Dr Wang Wen told the British Sociological Association online conference today [Wednesday, 25 August 2021], that a survey showed top ranking officers were more content in their civilian jobs, disproving the idea they were too regimented to adapt to civilian employment.

Dr Wang, of the University of Wolverhampton and Professor Matthew Flynn, University of Hull, analysed their research data on 203 former service personnel in the Army, Navy, Air Force and Marines who were aged 50 or over when they left the military. They found that 136 were employed or self-employed, 47 were in training or were unemployed, and 20 were not looking for work.

Of the 203, 47 had been a colonel, brigadier or general in the Army and Marines, or were between the ranks of Group Captain and Air Chief Marshall in the Air Force, or were Admirals in the Navy.

The researchers studied how the ranks rated their civilian jobs in terms of how interesting it was, how it made use of their skills and if they felt valued. They found that the most senior ranks were 38% more likely to report being happier with their current civilian employment than other ranks, and were more likely to say their civilian job was high quality.

They were more willing to change, as demonstrated by the fact that they were happier than other ranks with career advice, training and workshops provided by services’ Career Transition Partnership.

“Long serving military personnel are often viewed as being overly regimented and lacking adaptability, and it is commonly assumed that these factors make it harder for long-serving officers to successfully navigate the military-to-civilian career transition and ultimately find a satisfying civilian job,” Dr Wang, from the University of Wolverhampton Business School, told the conference.

“But my analysis does not support the negative association between military achievement of long-serving military personnel and the job satisfaction of civilian employment.”

One former Lieutenant Colonel told them: “I got a job as a project manager contracting for a client. It made use of my skills and I learned loads in that first year.  Once I got a foothold, I learned how to negotiate a decent package and then secured a permanent role with one of the client’s key suppliers.”

The service personnel had left the forces because they were either told to leave, were unhappy with their salary, felt they had no promotion prospects, or the work had become too physically demanding or too stressful.

• The researchers adjusted the data, which came from an Officers’ Association report into service personnel seeking civilian employment, to compare military personnel of similar age and qualifications to rule these factors out of the analysis. The project, funded by the Officers’ Association and the Force in Mind Trust, studies the challenges and barriers faced by ex-service men and women aged 50 or over seeking employment upon leaving the military.