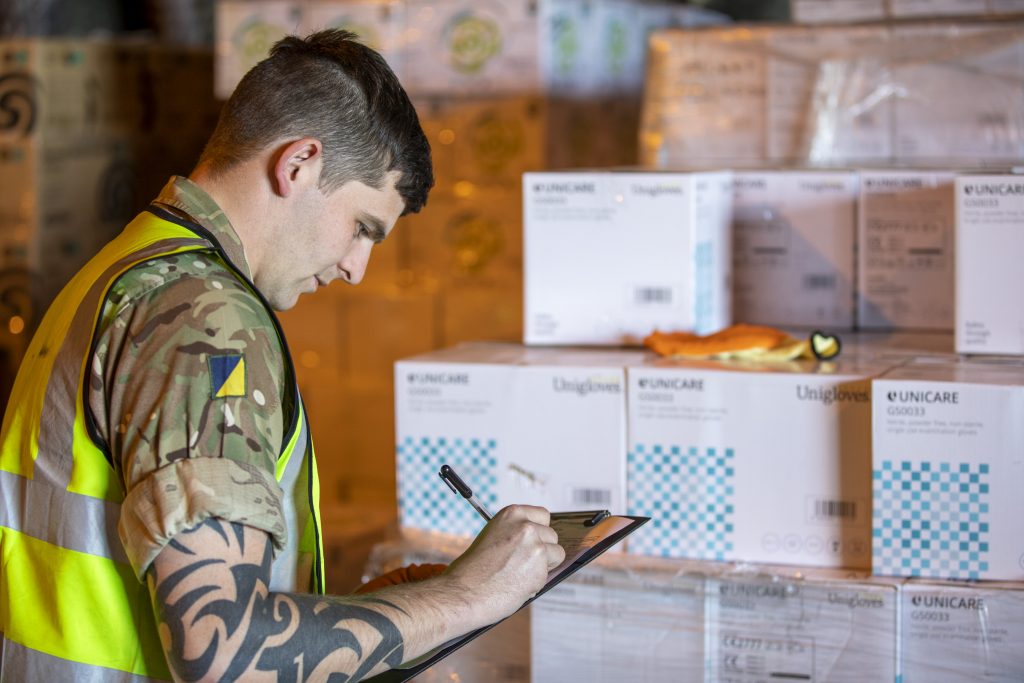 Military personnel are continuing supporting public services across the UK to assist with the response to COVID-19.

Since 18 March 2020, the MOD has responded to 231 COVID-19 Military Aid to Civilian Authority (MACA) requests.

As of 30 October 2020, there were 547 military personnel committed to assist with 35 open MACA requests. This number is kept under constant review and military personnel will be available to support where needed. There are an additional 7,500 personnel on standby as part of the Winter Preparedness Package who can be called upon for COVID-19 tasks.

The UK Armed Forces have deployed dozens of military planners across the UK. Working with Local Resilience Forums and Partnerships and alongside the Emergency Co-ordination Centres in Scotland and Wales, they are providing additional expert resource to support local communities and businesses and to roll out tracing systems. Military personnel deployed to civil authorities are also helping to free up council resource so Local Authorities can focus on critical areas including enforcing restrictions.

In Liverpool and Halton, 6 Environmental Health Officers (EHO) are supporting the Merseyside Local Resilience Forum and Halton Borough Council. The military EHO are trained extensively in outbreak management and they can interpret the information gathered by the NHS Track and Trace call handlers to identify and map trends, clusters and sources of infection. This information will then allow Local Authorities to follow up in specific areas and conduct any enforcement that may be required.

In Lancashire, 6 planners are supporting the Local Resilience Forum, focusing on supporting communities and businesses who are under Tier 3 restrictions, and rolling out the tracing programme. The planners are working with local districts to support vulnerable groups, ensuring robust plans are in place to give people access to vital supplies and medicines. The planners are also working with districts on support to businesses and the rollout of the COVID-19 marshals.

In addition, scientists, based at the Defence Science and Technology Laboratory (DSTL) have been deployed directly into government departments, local resilience teams and military headquarters, to provide instant assistance, insights and advice to planners and decision makers.

Assisting with the National Testing Effort

The UK Armed Forces have been supporting the government’s efforts to increase national testing capacity and support local authorities to get tests to those who need them. In Birmingham, 110 military personnel have been working with Birmingham City Council on a Drop and Collect testing initiative, delivering and picking up tests from homes across the city. In Nottingham, military personnel are supporting in the coordination of a volunteer network who are helping to deliver the Drop and Collect self-test initiative.

The military have also supported testing in schools, with over 1,500 tests carried out by 50 military personnel across three schools. This was carried out as part of a Public Health England trial to evaluate the effectiveness of rapid antigen tests in a school environment.

Scientists based at the Defence Science and Technology Laboratory (DSTL) have also been supporting and working with Public Health England to increase testing capacity nationwide. As part of wider testing capability at Porton Down, a total of up to 7000 tests per day can be taken.

The Department for Health and Social Care have identified Liverpool as the first site for the pilot of mass testing using new technologies. At the request of and in close collaboration with local leaders, around 2000 specially trained Armed Forces personnel will be deployed to establish and staff around 47 static testing sites.

Alongside this we will supporting the logistics and planning, and a small team of bio-medical scientists will work to train civilian personnel to conduct the tests. Everyone living or working in Liverpool will be offered repeat COVID-19 testing for up to two weeks, whether they have symptoms or not, to identify and trace more positive cases and break chains of transmission.