Defeat Don’t Repeat: Turning Your Game Around – The Story Of Sgt Rhys Rutledge

“I came from a hardworking family and I was brought up, not dragged up” begins Rhys.

“The first turning point in my life was making the wrong decision at such a young age. I wanted to be that little bit different, I wanted my own independence, I wanted to start earning money and that was the route I chose to take and the easiest option at that time.

I was kind of at a loss, I finished school and I didn’t know what I really wanted to do with myself and so from a young age I started dabbling in a bit of weed, sort of low level stuff and from there it really did progress to selling cocaine, speed, pills, acid, you name it – pretty much anything I could get my hands on, I was selling it.

And that’s when it started to spiral out of control…it got big and it got big very quick!

The ironic thing about all this is how it took a massive 360-degree turn. I had gone from a person demanding money if money was not paid on time, going around and taunting families to now actually being on the receiving end of it.

This is when I began to take cocaine and of course it is highly addictive and that is really when it did go downhill from there.
I am a strong believer in karma, and I was now on the receiving end of taunts and threats. The interrogation that my family was under and the constant intimidation from certain people in my area and they weren’t just low-level people, they were high up business personnel and not the sort of people to mess around with.

I was sentenced at the age of 19 and sent to prison but this did not stop things from escalating as I had a substantial debt hanging over my head and you are talking thousands of pounds at this point. The debt was never wiped and I came out of prison and had no other option but to carry on selling drugs, but now doing it on an even larger scale in order to pay off these people as quickly as possible.

I did this for another two years and in the meantime absolutely destroying my family, destroying anyone who got in the way and I was so fixated on feeding a habit again, paying money that I was owed and due and under a lot of pressure and I had even contemplated suicide twice because I could not see any other option or way out.

I was so in a dark place at that time.”

It was at this point, Rhys somehow looked to turn his life around, for the better this time…

“The second time I had looked at suicide, my mother had walked into my room and I was literally on my hands and knees crying for help at this point. I said “listen, I need to get away from here, I need something in my life to give me a purpose, I can’t see a way out.”

That is when I the decision to join the Army. The reason for this was what I was lacking in my previous lifestyle, which was discipline and structure and I thought what better place to go than the Army?”

And so, onto Rhys’ scheme – Defeat Don’t Repeat” …

“In 2018, whilst I was away on tour, the layout of the room was the same concept as a prison cell and whilst I was there, I had a bit of down time and I wondered what x. y and z were doing with themselves these days, wondering if they were still alive.
And then I thought what can I give back?

I had been through hell and come out the other side.

I floated the idea to the hierarchy within the Battalion, laid my cards on the table and wanted to exploit my story to help people out in a similar situation to what I was in.

People who have been to prison we tend to wipe our hands with them as a society and I am an example you can change.
As a result, I ran a course to offenders last October and it was a massive success. Due to COVID I have not been able to run courses in the meantime, but what I would like for the future is for serving military personnel to come forward if they also have previous and help deliver this. If you have a DS on these courses and they have been to prison, the student on the course with have an instant connection and that’s why it is and can be a further success.” 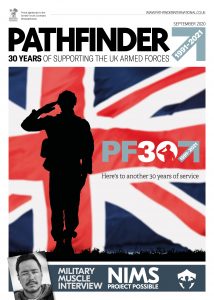