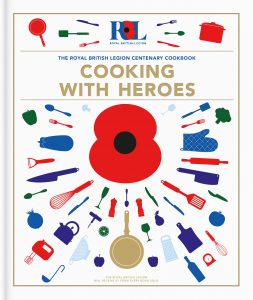 Successful executive placement agency, Pimento Connection is continuing to show its support for the Armed Forces community by holding a special book signing to celebrate the launch of the high-end cookbook, Cooking with Heroes, created by the Royal British Legion.

The upcoming book signing for Cooking with Heroes will take place at Brokers Wine bar in London’s Leadenhall Market at 11am on Wednesday 21st July and will be attended by the Lord Mayor of London William Russell, as well as Celebrity Chef, Cyrus Todiwala, who has contributed a recipe to the book.

Cooking With Heroes has been created in partnership with St James’s House publishing to celebrate the 100th anniversary of the Royal British Legion (RBL). The cookbook has contributions from serving members of all three Armed Forces, including military chefs, who have provided delicious and authentic recipes from 100 places around the world in which the RBL has operated. Each regional recipe is accompanied by a fascinating profile of a hero specific to that location – a service man or woman, or civilian – whose contribution to life will be remembered through the ages.

Also featuring contributions from celebrity chefs such as Jamie Oliver, Rick Stein and The Hairy Bikers this high-end cookbook will be raising money for the Royal British Legion, the UK’s largest military charity. All proceeds from books sold at the event will be donated to the RBL to help the Armed Forces charity continue its vital work.

Pimento Connection, an award-winning defence employer recognised company, is an official sponsor of the cookbook. Looking forward to the book signing and Pimento’s involvement, Cliff Allum, Global Director, ] says, “Pimento is very proud to be associated with this project. As former servicemen ourselves we know the benefits of hiring a veteran.  They bring so much more to a company than just qualifications. As for the cookbook, I think it was Napoleon who once said that an army marches on its stomach. With recipes such as these I suspect he may have been right.”

Ben France, Head of Corporate Partnerships at The Royal British Legion says, “The RBL is excited to be working in partnership with St James’s House on Cooking with Heroes in our centenary year, and we are grateful to Pimento and all the sponsors who have made this project possible. The donations raised from this event will be used to provide life-long support and better futures to serving and ex-serving members of the British Armed Forces, their families and dependents through hardships, injuries and bereavements in the years to come.”

St James’s House (company no: 04132980) will donate 100% of net profit from retail sales (£5 from the £19.95 RRP) to the Royal British Legion, a registered charity (number 219279). Contributions will go towards the RBL’s lifechanging work supporting those who serve or have served in the Armed Forces and their families. Available to purchase here: https://www.stjamess.org/product/cooking-with-heroes/

Check out three of the recipes from the cookbook below…

The legendary Cullen skink comes from the small fishing port of Cullen on the east coast of Scotland. The word “skink” means a soup or an essence. The local fishermen would smoke the smaller fish of their catch and these, with some locally grown potatoes, formed their staple diet. This is a recipe that I learned from my Scottish grandmother, Granny Megsie. The aroma of Cullen skink takes me right back to Granny’s kitchen and the vision of an array of socks drying on the bar of her old coal-fuelled Aga.

Chopped chives, for a bit of a spruce at the end! 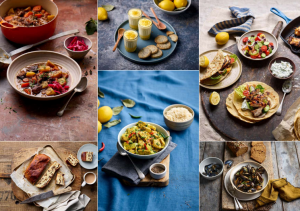 Cheese soup was originally a peasant’s dish using cheap ingredients to make a tasty meal, here we use it to celebrate Cheshire cheese, the famous dairy speciality of the region. It is one of the country’s oldest recorded cheeses mentioned as far back as 1580 and claimed to be included in the Domesday Book. Other fantastic produce of the region are asparagus and apples, which are perfect to incorporate into this dish – the crumbly, tangy and salty cheese paired with asparagus makes a fantastic and unique soup which is only enhanced when paired with the wholesome, almost sweet, nutty soda loaf.

For the apple & walnut loaf

2 cooking apples, cored and coarsely chopped or grated, with skin

For the asparagus & Cheshire cheese soup

To make the apple & walnut loaf

To make the soup

Ital soup is a vegetarian meal intended to improve your health and energy. Ital, meaning natural and clean, is said to be a belief of Rastafari and avoids the death of God’s creatures by consuming food grown from the earth around them. Using simple and delicate flavours using plant-based foods is popular in Jamaican cuisine; this dish will give you a taste of the Caribbean you won’t forget.

50g jackfruit, cut into 2cm dice (you can use canned if fresh is unavailable)