Facing The Power Of The Atlantic 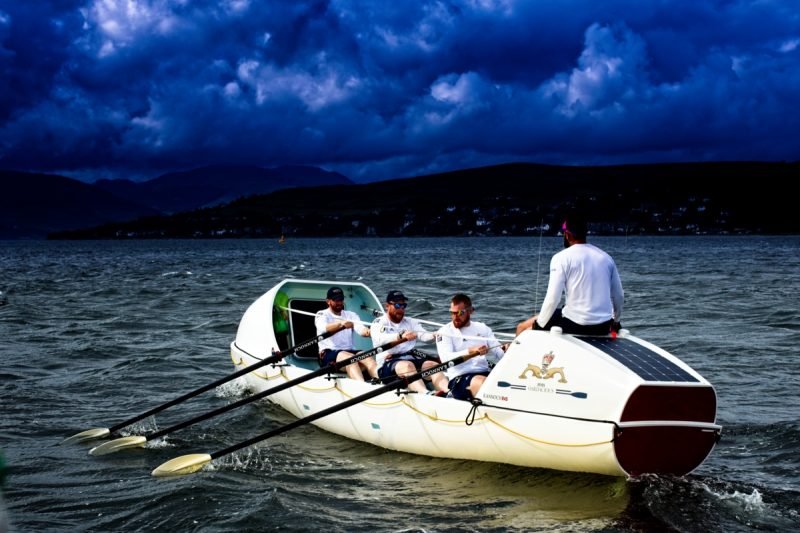 Next month four serving Royal Navy submariners – HMS Oardacious – face the remarkable mental and physical challenge of rowing unsupported in a race across the Atlantic Ocean, making them the first ever official RN team to take part in the world’s toughest rowing race, the 3,000-mile Talisker Whisky Atlantic Challenge….

The team will depart from La Gomera in the Canary Islands on 12th December 2019 and are aiming to reach Nelson’s Dockyard in Antigua just over a month later. Renowned as the “world’s toughest row”, the HMS Oardacious crew will race against 40 teams from all over the world whilst facing the challenge of battling 30 foot waves, sleep deprivation, salt sores, torrential rain and every submariner’s nightmare – blistering sunshine.

The crew will operate a shift pattern, rowing two at a time for two hours and resting for two hours, 24 hours a day for over a month. They will consume 10-Litres of water and over 7,000-calories each every day to sustain themselves in this ultra-endurance activity, over which they are expected to row more than 1.5 million oar strokes.

The team’s participation in this herculean voyage will help to mark 50 years of unbroken service in maintaining the Continuous At Sea Deterrent – paying tribute to the human endeavour and commitment necessary to sustain this vital operation.

It has also given the team a voice and a platform for some fantastic charity work; working with the Royal Navy and Royal Marines Charity to provide Mental Health support to the Submarine community, targeting serving personnel, veterans and their families, with the aim of leaving a lasting legacy of wellbeing. The team have now raised just over £90,000 for charity and are well on track to meet their £100,000 target.

Preparing for the challenge, Marine Engineering Officer and expedition leader Lieutenant Hugo Mitchell-Heggs said: “Our culture as Submariners seems like the perfect preparation for this challenge – knowing everything there is to know about our boat, looking out for our team mates or managing watch systems, all while contending with sleep deprivation and dealing with the emotions of leaving our loved ones.”

The team’s campaign has been funded by 52 sponsors from the Defence sector and other affiliates. Weapons Engineering Officer and expedition 2I/C Lt Callum Fraser said: “We have been shown that sponsorship is more than just advertising; it is an alignment of values and the belief in a common goal. We are incredibly grateful for all the support our sponsors have shown us over the past 12 months.”

The boat, ‘Oardacious’, is a 28 ft fibreglass, self-righting Rannoch-45 Ocean rowing boat. Weighing just over 1 tonne when empty, it has two 6-foot cabins (one at each end) where the crew will rest in their down time. The team will row unsupported, meaning they need to carry everything required to get across safely. The kit list includes a vast array of technical gear for navigation, satellite communications and water production.

They have three solar panels to charge their battery allowing them to produce over 50 Litres of drinking water each day and also power the various navigation and safety equipment fitted. They have packed over 1.5 million calories of food to keep going and manage their inevitable weight loss.

The crew, Hugo, Dylan, Callum and Matty will be in the Canaries in early December to carry out final boat checks and preparations before launching from San Sebastian de la Gomera on 12 December. You can follow their progress and donate via www.hmsoardacious.com or on social media @hmsoardacious. You can text NAVY OAR to 70500 to donate £5 to the Royal Navy & Royal Marines charity.

More people have been into space or climbed Everest than have rowed across the Atlantic.