From Peace Babies To Jelly Babies! 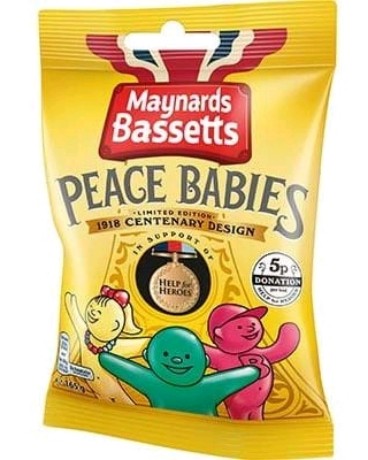 100 years on from the end of the First World War, Maynards Bassetts is partnering with Help for Heroes for a very special anniversary…

In celebration of the end of the First World War in 1918, George Bassett & Co. produced Peace Babies – what would later become the confectionery classic we all know as Jelly Babies.

Now, to commemorate the centenary of the end of World War One, Maynards Bassetts has designed a special limited-edition pack of Peace Babies available at Tesco. Aiming to raise over £25,000 for Help for Heroes*, the money raised will help support those who put their lives on the line for us to have a second chance at life for them and their families.

Archivists at Mondelez trawled through records and found a rare surviving copy of an export list mentioning the sweet treat. Thought to be from the 1920s or 30s, this shows a ‘hundred-weight’ (100lb or 45kg) of Peace Babies listed for sale in ‘4lb wood boxes’, for the grand total of 68 shillings. This would be the equivalent of £139.60 in today’s money!

It is thought that these were on sale until a shortage of raw materials put a stop to production during World War Two. In 1953, they were relaunched as Jelly Babies – the rest, as they say, is history!

Available at selected Tesco stores and www.tesco.com while stocks last.