From Portsmouth To Odesa, UK And Ukraine Naval Cooperation On Show As Ukrainian President Visits HMS Prince Of Wales 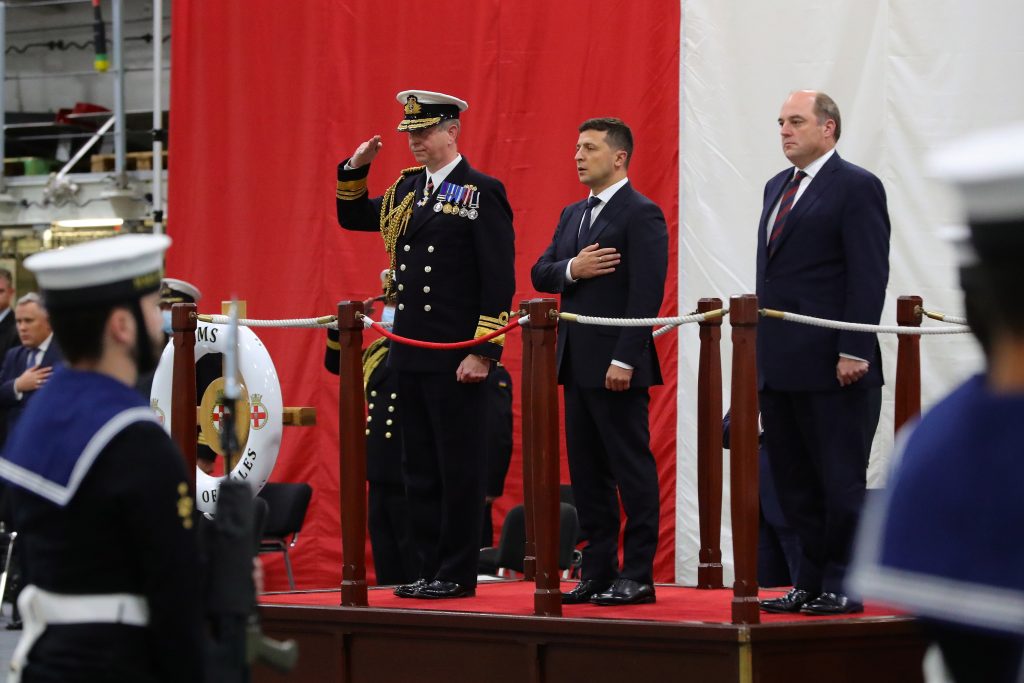 The UK and Ukraine underlined their commitment to future defence cooperation by signing a Memorandum of Intent on Wednesday aboard aircraft carrier HMS Prince of Wales.

It came as Royal Navy Type 45 destroyer HMS Dragon sails in the Black Sea in support of freedom of navigation. A port visit to Odesa will enable interactions with Ukrainian counterparts and showcase the UK-led Maritime Training Initiative.

Mr Wallace, Mr Zelenskyy and Mr Taran took part in a roundtable with representatives from the British defence industry in which they explored how the UK could support Ukraine in strengthening its Navy. The Defence Secretary and his counterpart then signed a Memorandum of Intent in which both countries asserted they would continue to work together on developing Ukraine’s naval capabilities.

Defence Secretary Ben Wallace said:
“Defence is at the heart of the UK’s special partnership with Ukraine. I’ve been fortunate enough to visit Ukraine twice in the past year, where I expanded our commitment to supporting the Armed Forces of Ukraine. Now I am delighted to be able to welcome President Zelenskyy and Defence Minister Taran to explore how we can strengthen that relationship even further.”

The UK’s commitment to supporting Ukraine’s security was demonstrated with engagements in both countries this week.
In Portsmouth on Wednesday, aboard a world class aircraft carrier that signifies UK defence’s state-of-the-art shipbuilding capabilities, Ukrainian President Zelenskyy witnessed the signing of a Memorandum of Intent for both countries to cooperate further. Meanwhile in Odesa, a strong and visible demonstration of the UK’s commitment to its defence relationship with Ukraine was on show by the visit of HMS Dragon to the port of Odesa.

Following the Ukrainian President’s visit, the head of the Royal Navy First Sea Lord Admiral Tony Radakin delivered a speech aboard HMS Prince of Wales in which he discussed the future of a Global Navy for a Global Britain, forward deployed around the world – just as HMS Dragon currently is by sailing in the Black Sea.

In August the Defence Secretary announced on a visit to Ukraine that the UK will lead a multinational Maritime Training Initiative for the Ukrainian Navy that will boost its ability to combat threats in the Black Sea.

Ukraine lost much of its naval capability during Russia’s illegal annexation of Crimea in 2014 and Ukraine has since continued to face a rising number of threats in the Black Sea and Sea of Azov. In response, Ukraine has been building its Navy to protect its economic interests and its right to freedom of navigation and the UK is supporting this effort.

At the defence industry roundtable, President Zelenskyy, Defence Minister Taran and the Defence Secretary were delivered presentations from leading companies in the British defence industry.

The Defence Secretary and the Defence Minister Taran followed up their visit to HMS Prince of Wales with a bilateral meeting at the Ministry of Defence in Westminster on Thursday. The pair discussed wider regional security and key aspects of the Memorandum of Intent.

Since the UK’s training mission to Ukraine Operation Orbital began in 2015, British troops have trained over 18,000 members of the Ukrainian Armed Forces (UAF). Their efforts have made a real difference and saved lives as Ukraine faces down Russian aggression and threats to its sovereignty. Last year the Defence Secretary extended Operation Orbital until 2023.
The UK’s Operation Orbital and Maritime Training Initiative is complemented by US security assistance support. This will further enhance Ukraine’s capabilities and situational awareness in the maritime domain to more effectively defend itself against Russian aggression. The UK continues to urge all allies and partners to enhance their support for Ukraine.