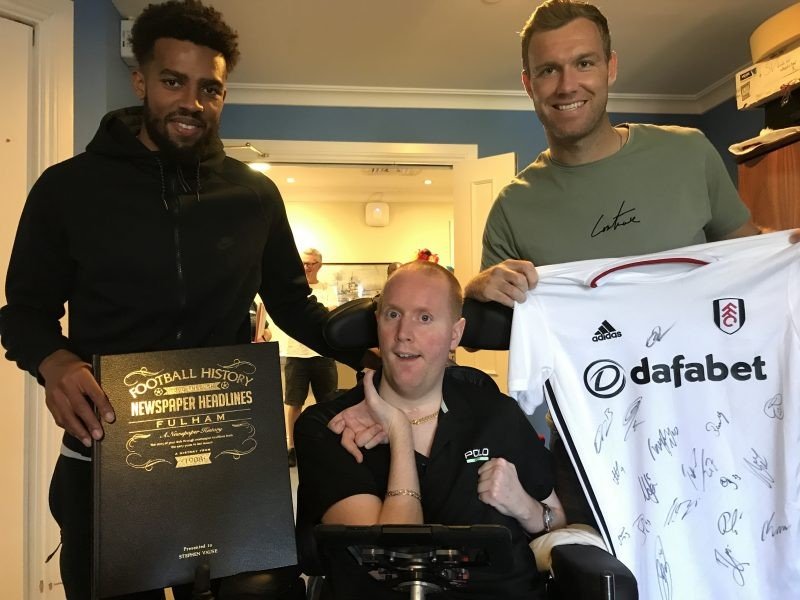 A disabled soldier, injured in Iraq, was surprised by a visit from Fulham footballers Kevin McDonald and Cyrus Christie who dropped in to meet die-hard fan Stephen Vause at The Royal Star & Garter Home in Surbiton…The visit was organised by staff at the Home, who form close friendships with the residents and love to arrange treats and surprises for them. Stephen was presented with a Fulham shirt signed by the squad, and a signed book featuring press cuttings from Fulham matches over the years.He was also promised two tickets to a match of his choice this season. The players were also taken to the Physiotherapy room where Stephen regularly works out. Stephen was just 19 and on his first tour in Iraq, serving with the 4th Battalion The Rifles, when he suffered brain injuries in a mortar explosion near Basra. The attack left him severely disabled.The Royal Star & Garter Homes cares for ex-Servicemen and women and their partners living with disability or dementia. The Charity has been caring for Stephen since 2015. Following the visit, Stephen said: “I had no idea they were going to turn up. I’m feeling very grateful. It was amazing.”Scotland international McDonald spoke of his admiration of the Home and Stephen. He said: “Every day we get a lot of kicks that cause a bit of pain, but then we meet guys who put their lives on the line for their country. It puts everything into perspective to meet people like this. When you consider what Stephen’s been through it’s an honour to meet him.”Cyrus Christie’s brother was in the Army for 10 years and served in Afghanistan. The Irish international said it was “humbling” to meet Stephen and added: “He’s a true inspiration.”