Guard Of Honour For Prime Minister Of Japan

As the UK Prime Minister, Boris Johnson, welcomed his Japanese counterpart, His Excellency Prime Minister Kashida of Japan, to London, the pair were treated to a spectacular simultaneous display of Army ceremonial on the ground and a Royal Air Force flypast in the skies. 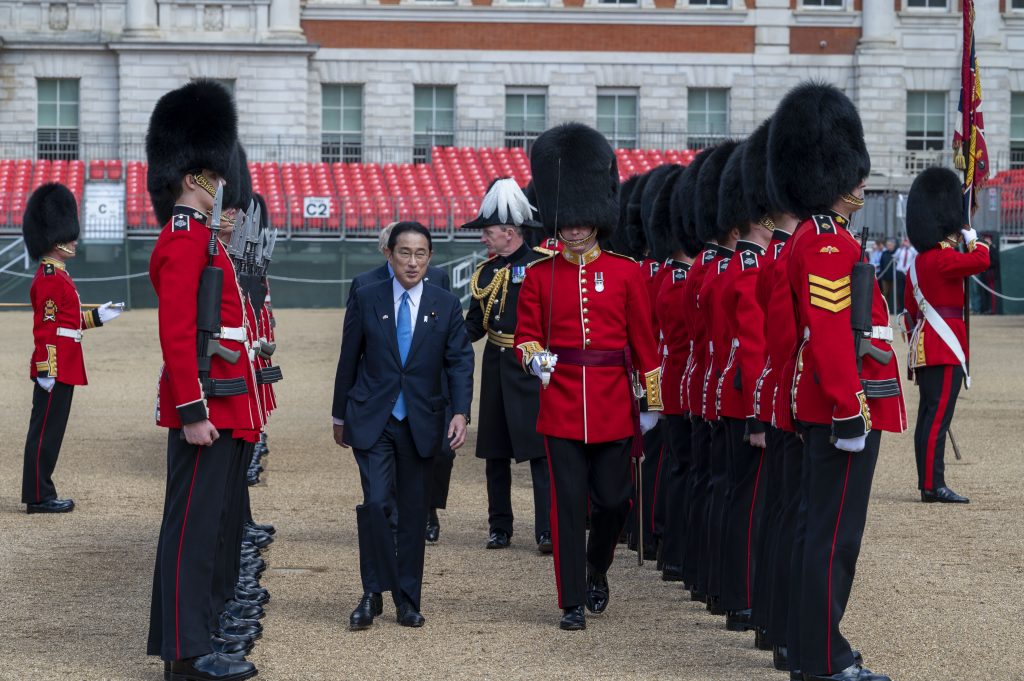 The Grenadier Guards are one of the oldest Regiments in the British Army, and have fought with distinction and honour in almost every war and conflict since 1656. Nijmegen Company is a Public Duties Incremental Company, and the majority of those on parade are some of the Army’s newest recruits whose discipline is honed by ceremonial duties before they take on their operational role with the 1st Battalion Grenadier Guards across the globe.

They will soon play an important part in the forthcoming Platinum Jubilee Celebratory weekend for Her Majesty The Queen. Today, the Guards were on parade in the iconic Summer Guard Order military uniform of scarlet tunics and white plumed bearskin caps. The Band of the Scots Guards, directed by Major Tony Williams, and led onto parade by the Household Division Senior Drum Major, Warrant Officer Class 2 Gareth Chambers, performed a rousing musical accompaniment. As His Excellency alighted the saluting dais with Boris Johnson, a Fly Past by the Royal Air Force consisting of 1 x Voyager ‘Vespina’ and 2 x Typhoon aircraft appeared over the roof of Buckingham Palace, passed over the Lake in St James’s Park, and flew straight over the heads of the two Prime Ministers, drawing smiles and gasps from onlookers.

Then the Captain of the Guard of Honour invited His Excellency Prime Minister Kashida, in perfect Japanese, to inspect the Guard, which he did, as the Band played on.

After the inspection the two Prime Ministers retired to Number 10 Downing St for an important meeting between our two nations. Every serving personnel, although operational fighting forces first and foremost, takes great personal pride in delivering the soft power of defence diplomacy.

For those serving on the ground, and those in the air, it was a day they will remember for a long time.