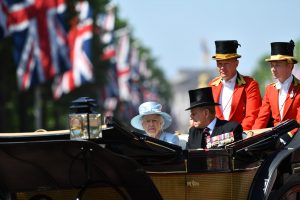 Pictured, Her Majesty the Queen and Prince Phillip move to Horse Guards to inspect the guard as the Army celebrate the birthday of their Queen.

At 1200 yesterday (10 April) a Death Gun Salute was fired to mark the death of His Royal Highness, Prince Philip, The Duke of Edinburgh. Across the United Kingdom, in Gibraltar and on HM Ships at sea, saluting batteries fired 41 rounds at one round every minute for 40 minutes. The public were encouraged to observe the gun salutes from home, they took place behind closed doors but broadcast online and on television. 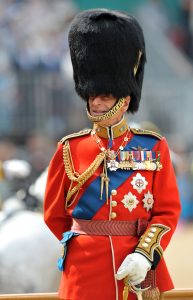 Pictured is his Royal Highness Prince Philip, The Duke of Edinburgh is pictured during the Queen’s Birthday parade in 2011.
The Duke is wearing the uniform of the Colonel of the Grenadier Guards.

In London, The King’s Troop Royal Horse Artillery rode out from their base at Napier Lines, Woolwich Barracks, onto the Parade Ground with 71 horses, 36 of them pulling six 13-pounder field guns dating from the First World War. Their guns fired at the same time as those fired by the Honourable Artillery Company’s Light Guns at the Tower of London and by units from all corners of the United Kingdom including Belfast, Cardiff and Edinburgh, and British Overseas Territory Gibraltar. At sea, guns fired from Royal Navy saluting warships. 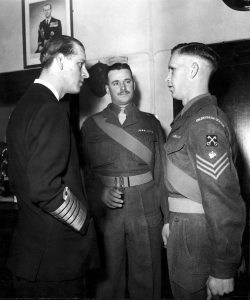 The same guns that were used at Woolwich Barracks were also fired for Prince Philip’s wedding to Her Majesty in 1947 and at Her Majesty’s coronation six years later in 1953.

The tradition of gun salutes routinely being fired throughout the country to mark significant national events dates centuries, and there are historical records of salutes taking place as early as the 14th century when guns and ammunition began to be adopted widely. Similar gun salutes were fired to mark the death of Queen Victoria in 1901 and Winston Churchill in 1965. 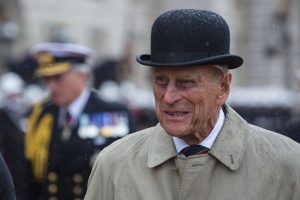 Image shows HRH the Duke of Edinburgh meeting Royal Marine Cadets at his last public appearance.
The Royal Marines have given The Duke of Edinburgh a Royal Salute as members of the Corps family marked his last official engagement as their Captain General. His Royal Highness’s association with the Royal Marines dates back 64 years to 2nd June 1953, upon Prince Philips appointment as Captain General Royal Marines in succession to the late King George VI. During that time, His Royal Highness has carried out a large number of visits to The Royal Marines at home and overseas, wherever they have been stationed. In the past year alone, he has spent time with the Corps in London, Portsmouth and Plymouth..