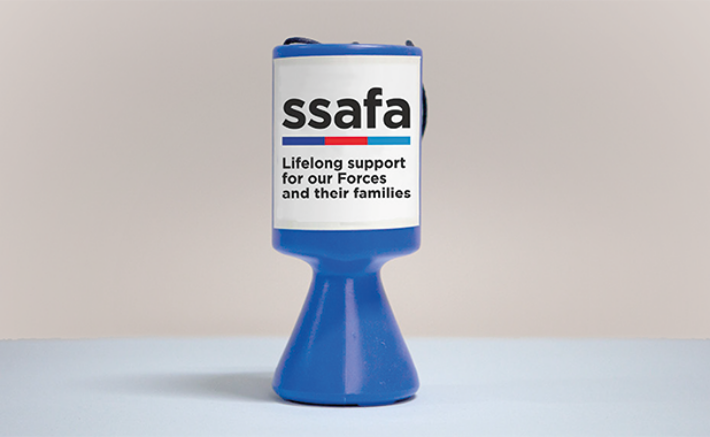 Around 200 members of the prison population currently work in ‘Industries’, including some Forces veterans. This gives those that participate a feeling of inclusion, allowing them to rebuild dignity and have a sense of purpose.

The local branch of SSAFA, the Armed Forces charity in Bristol & South Gloucestershire has agreed with the prison’s Head of Industries, Emily Trotman, and Governor, Neil Lavis, that old plastic collection tins will be refurbished by this workforce. This then allows the charity to continue raising invaluable funds for the Armed Forces community as a whole – including those in the Justice System.

Additional benefits of the initiative include lowering the charity’s environmental impact by reusing plastic collection tins and saving SSAFA money on purchasing new tins, as well as the wider impact of engaging the prison population with a worthy cause and helping rehabilitation.

Dawn Civill-Williams, SSAFA Branch Chairman, said: “We are delighted to be engaging with this community through positive action that benefits our charity. We’re proud to have the back of the whole Forces family from every walk of life and know that our non-judgmental style of support can often be a real turning point for veterans who find themselves in the Criminal Justice System.”

SSAFA offers support to members of the Armed Forces community currently in the Criminal Justice System, and their families. Through its network of volunteers, SSAFA works with local prison and probation services to support veterans in prison and with any identified needs closer to release.

Without judgement, SSAFA works with veterans, no matter what the circumstances. Understanding the complex journey that can sometimes be faced upon leaving the Forces, SSAFA aims to address and remove barriers that prevent successful rehabilitation and work closely with organisations within the Criminal Justice System to help change offending behaviour and patterns.

For more information about SSAFA’s work with Veterans in the Criminal Justice System, click here.