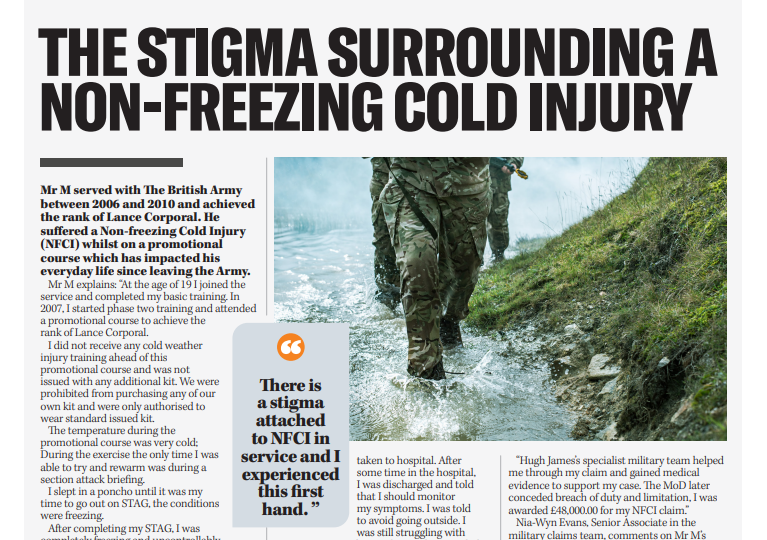 Mr M served with The British Army between 2006 and 2010 and achieved the rank of Lance Corporal. He suffered a Non-freezing Cold Injury (NFCI) whilst on a promotional course which has impacted his everyday life since leaving the Army.

Mr M explains: “At the age of 19 I joined the service and completed my basic training. In 2007, I started phase two training and attended a promotional course to achieve the rank of Lance Corporal.  I did not receive any cold weather injury training ahead of this promotional course and was not issued with any additional kit.

We were prohibited from purchasing any of our own kit and were only authorised to wear standard issued kit.  The temperature during the promotional course was very cold; During the exercise the only time I was able to try and rewarm was during a section attack briefing. I slept in a poncho until it was my time to go out on STAG, the conditions were freezing.

After completing my STAG, I was completely freezing and uncontrollably shaking. I removed my shoes; my feet were numb and looked strange. They were very white in colour, they looked like glass and my veins were dark purple and prominent. I felt like complaining about this type of injury was discouraged. When I tried to walk, I felt like a penguin, I was struggling so much. I did not feel steady on my feet, I was concerned that I was going to seriously injure myself. I called my section commander over to show him my feet and later told my platoon sergeant that I was struggling, I was encouraged to put my boots back on and to continue with the exercise, they thought I was a ‘drop out’.

I felt that it was dangerous to continue with the course and reported my feet again, this time I was told to get in the back of a vehicle. I removed my socks and boots; my feet were inspected by the platoon sergeant and medical staff. I was casevaced back to camp and later taken to hospital. After some time in the hospital, I was discharged and told that I should monitor my symptoms. I was told to avoid going outside. I was still struggling with symptoms to my feet, and I was downgraded and put on light duties. I was not allowed to be put on guard or play any sports. I was told that I sustained a NFCI to my feet.

After my injury, I was issued with thermal boots. I do not know why these were not issued to me sooner; this may have avoided my injury. There is a stigma attached to NFCI in service and I experienced this first hand. There were constant comments about my feet in service. I was called negative names daily due to my injury and these were circulated online with a picture of me, this was humiliating.  I still suffer with symptoms to my feet when it’s cold. I have missed out on skiing trips with friends and playing golf and football in the colder months because of my injury. It is a concern that as my children grow up, my injury may impact playing with them outdoors”.

Mr M got in touch with our specialist military team in January 2019.

“Hugh James’s specialist military team helped me through my claim and gained medical evidence to support my case. The MoD later conceded breach of duty and limitation, I was awarded £48,000.00 for my NFCI claim.”

Nia-Wyn Evans, Senior Associate in the military claims team, comments on Mr M’s case: “It is concerning that serving personnel are sustaining preventable injuries at the start of their career, and that these injuries can impact individuals, like Mr M, for the rest of their lives. After enduring the stigma attached to NFCI, I am pleased that we were able to secure a settlement for Mr M to compensate him for his injuries and the impact that the injury has on his life.”

If you suffer from a cold injury due to serving in the Military, you may be entitled to compensation. Get in touch with our specialist military solicitors today. Contact our specialist team today to discuss your options. 08081010046