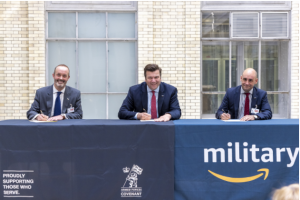 Organisations have affirmed their commitment to supporting personnel and veterans by signing the Armed Forces Covenant during Armed Forces Week.

Landmark groups signing the Covenant this week include the House of Commons, while Amazon and Amazon Web Services (AWS) have reaffirmed their commitment as signatories.

A promise and commitment to ensure personnel, veterans and their families are treated fairly, the Covenant is entering its 10th year and has now been signed by 7,000 businesses, both large and small.

I’m delighted that the House of Commons and Amazon are showing their support for our service personnel by raising the flag and signing the Covenant. It is also welcome that Amazon and Amazon Web Services have reaffirmed their commitment to the Armed Forces Covenant as well.

This week is an annual opportunity for all of us to recognise the work our Armed Forces do, at home and abroad, to keep us safe.

The Armed Forces Covenant is a promise by the nation to ensure the fair treatment of those who are serving, veterans and their families. I’m delighted to see even more organisations – including Parliament – sign up to this pledge.

As the Covenant enters its 10th year, I am delighted to see some of our signatories – like Amazon and Amazon Web Services – reaffirming their commitment. With this continued support we will ensure it continues to attract as many signatories as possible.

The Speaker of the House signed the Covenant on behalf of the Commons in a flag-raising event marking the start of Armed Forces Week, attended by Defence Secretary Ben Wallace, service personnel and cross-party MPs.

The Covenant has had a positive influence on many areas in society, including education. For example, school admissions policies have been shaped to take into account the unique needs of service families who are relocating and £23-million a year is given to schools where service children attend.

Healthcare is another area that has seen positive changes. Support to service families from the NHS has been greatly improved and 800 GP practices in England are now accredited as ‘veteran friendly’, meaning the best possible care and treatment is available at these practices to patients who have served in the Armed Forces.

The Armed Forces Covenant led to the introduction of the Forces Help to Buy Scheme, which has helped over 21,000 service personnel get on to the housing ladder. The scheme enables servicemen and servicewomen to borrow up to 50% of their salary, interest free, to buy their first home or move to another property on assignment, or as their family’s needs change.