Looking For A Career Within The Automotive Industry?

Pathfinder International spoke to the Jardine Motors Group to highlight four successful case studies in which service personnel have made the transition from forces to motors.

Aaron was one of the first people to benefit from a partnership with Jardine Motors Group, based on the Army’s ‘Careers Transition Programme’, joining Oldham Audi as a Sales Executive in July 2017. 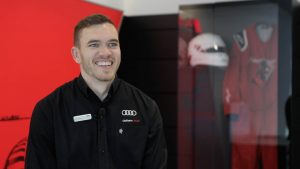 Aaron joined the Army straight from school at 16, where he worked his way up to an Arming Landing Point Commander. During this time, Aaron was in charge of a £64 million apache helicopter, as well as seven other employees who worked under him whilst on tours of Iraq and Afghanistan.

Once leaving the Army, it took Aaron a bit of time to adapt to civilian life. He tried three different jobs before finally finding what he calls his “happy place”, as part of Jardine Motors Group. Working at Oldham Audi, Aaron was relieved to find a workplace where he could be himself and still share in the banter he was missing from his time in the army.

Having never sold a car in his life, Aaron flourished under the in-house training and felt a new lease of life learning a completely new trade. Aaron was able to adapt to his new role instantly thanks to the skills he learnt had previously. His military background helped Aaron to show his colleagues and customers how much potential he has to offer thanks to his desire to get the job done, ability to adapt to any situation and possessing outstanding organisation skills.