With its head office located just a few short yards from The Royal Welsh’s Regimental Headquarters at Maindy Barracks in Cardiff, Companies House has always been supportive of the armed forces. 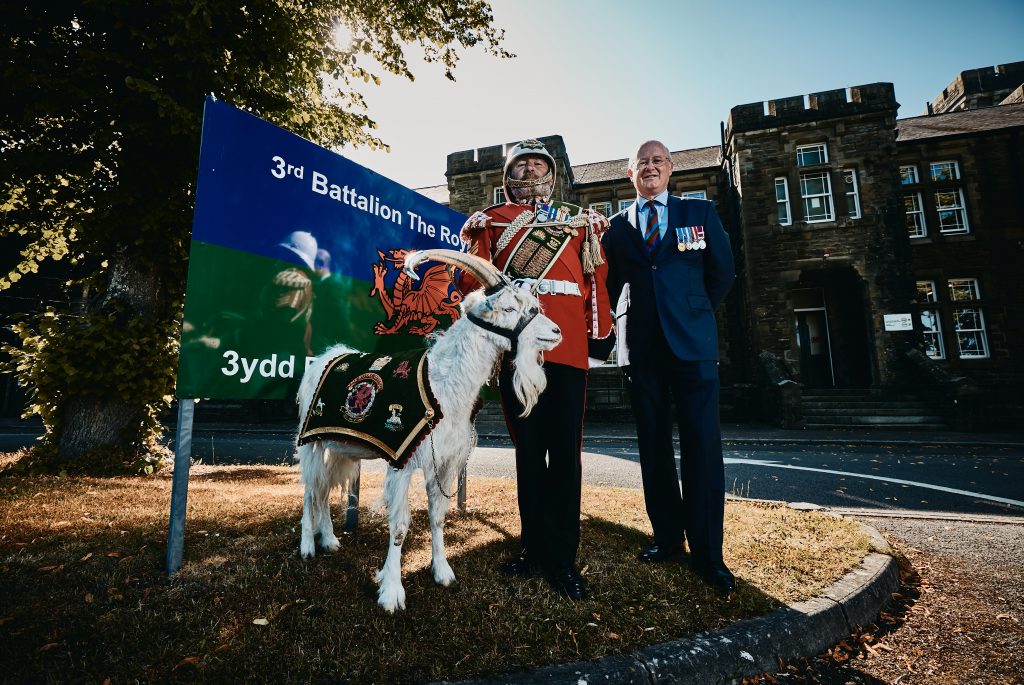 The organisation is currently three years through a five-year transformation project, under which an ambitious programme of change is being delivered. To help achieve this, Companies House is drawing upon the skills and experiences of a diverse group of people.

Nowhere is this more evident than at the heart of the organisation, where a small cohort of ex-service personnel are helping to shape its future, utilising skills forged in the military to help deliver the transformation.

One of them is 55-year-old Lance Patterson, a former officer with the Royal Regiment of Wales and Adjutant General’s Corps. Currently, he is employed as a Principal Policy Advisor where he leads on the organisation’s international relationships.

“My first contact with the army was in Maindy Barracks as a 16-year-old schoolboy when I went to see the Regimental Secretary for my first interview,” says Lance, who left the military as a Colonel.

“It’s quite ironic that my working life started at Maindy Barracks, and I’ve ended up working across the road, so it’s come almost full circle.”

Lance, who spent time serving in the conflict in the former Yugoslavia, as well as Hong Kong, Canada, and Germany, cites his beginnings as an infantry officer as the ideal foundation for the rest of his career. As well as various leadership roles within the British Army, Lance also worked for the Ministry of Defence as the Head of Employer Engagement.

“I think my service has made me resilient. I’ve been in confusing situations before where I’ve had to develop situational awareness quickly and I think I’ve applied that experience to my work here. I think that’s helped me in terms of focusing on what I really need to know and what really needs to be done.”

Established in 1844 as the UK’s register of companies, Companies House is set to undergo some of the most radical changes in its history.

Today Companies House plays a crucial role within the UK economy, supporting growth and underpinning confidence in business. New legislation however will see the agency given new powers and have its traditional role drastically reformed to help combat economic crime and further drive confidence in the UK economy.

Lance heads up the organisation’s involvement with the European Business Registers Association and the Corporate Registers Forum (CRF), of which Companies House Chief Executive Louise Smyth is the current President. He says his experience in the army, both at home and abroad, has equipped him well for the tasks.

Most of his work however focuses on tasks which are crucial to the Companies House transformation, co-ordinating policy work related to proposed new legislation aimed at tackling economic crime and ensuring the register continues to inspire trust and confidence.

“I pick up the requests and drafts coming in from BEIS (Department of Business, Energy, and Industrial Strategy) and make sure we’re turning those around in time, tracking them and recording our decision making. I need to make sure we’re communicating effectively upwards, downwards, and sideways; making the whole system work.”

Lance describes Companies House as a “hugely supportive” employer, citing the organisation’s paid volunteering leave among one of the benefits – which allowed him to take the time to volunteer at the Platinum Jubilee celebration for the Queen at Windsor. Companies House is now also signed up to the Great Place to Work for Veterans scheme, which makes it easier for veterans to secure interviews for Civil Service roles.

He adds: “Companies House is pivoting and will require people in the future who’ve got problem solving capabilities and who’ve got the courage of their convictions to act and make interventions when appropriate.

“I think that that will be something that appeals to veterans, to be trusted in that operational environment and to be able to make decisions and take action in support of the objectives of Companies House.”

The Companies House register, renowned as one of the most open and accessible in the world, helps to inform millions of global business decisions. The register contains information on more than 4.8 million companies and was accessed 11.4 billion times last year.

Kay Southall is another veteran bringing her skills to Companies House. She is currently employed as Senior People Change Practitioner, working at the heart of reform to support people across Companies House through the changes.

Kay says: “It’s important we understand how these changes will impact people and provide the right support to prepare them for the change, making sure they know what is changing and why, and how it will impact them. Providing the right communication and engagement, and training to help them transition to new ways of working.

“It’s very much a collaborative piece, working closely with our operational colleagues, and delivery partners in learning and development, internal communications and our engagement team.”

Kay joined the Intelligence Corps shortly after leaving school and, following her training, served in Cyprus during the first Gulf War and in operations in the Falklands Islands after the conflict.

Like Lance, Kay, aged 53, is quick to attribute her time in the military with developing many skills, including effective communication, planning, analysing data accurately and working as part of a team.

Kay says: “You learn to value difference and recognise that that not everybody is like you. You quickly learn what it means to be part of a team and recognise what other people bring to it. My time in the military shaped my understanding of what good leadership looks like, and this has shaped my own leadership style.”

She left the army in 1995, eventually moving back to her native Wales to take up a civilian role with her local police force, and as a national advisor to chief police officers on emergency contact management. She gained extensive experience in this area and spent time working in the charitable sector, and as a private consultant before moving into the Civil Service. After meeting Companies House employees at a networking event, Kay saw an opportunity with the organisation and decided to apply.

She says: “They talked about Companies House, its culture, and it was a nice place to work. I thought: ‘maybe I’ll start looking on Civil Service jobs [website] to see if anything comes up’ and then a job popped up which was in change management.”

As well as the culture, Kay greatly values Companies House’s generous leave package, paid volunteering scheme and network of internal communities, which provide a diverse range of support services for people across the organisation.

Adds Kay: “There’s a community set up here that I’ve not experienced anywhere else. I’m a proud Mental Health Advocate and the support that Companies House provide in helping people with their mental health is fantastic. I think for some veterans that is important.”

People Change Manager Dave McFarlane spent a large amount of time during his military career in the British Army operating and commanding tanks and armoured reconnaissance vehicles, so he knows a thing or two about resilience and adaptability.

The 27-year veteran of the Royal Tank Regiment served in conflicts across the globe including during the first and second Gulf Wars, primarily working on Chieftain and Challenger tanks. He also served in Oman, Germany, Cyprus, and Canada.

He served as the Reconnaissance Troop Staff Sergeant, Regimental Quartermaster Sergeant Technical and spent time working at MoD Abbey Wood within the Battlefield and Tactical Communication Information Systems (BATCIS) Delivery Team. He left the military in 2015 at the rank of Warrant Officer Class 2.

Leading a team in close quarters and in challenging circumstances comes naturally to Dave, who describes the concept of “leading from the back” as being as important as the other way round.

Dave, aged 52, also lists his “meticulous” planning, preparation, and communication skills as key attributes honed during his time in the military. But he also describes the importance of being adaptable and to ‘flex’ from a plan if needed.

After a short stint working in the private sector, Dave moved into the Civil Service with the Ministry of Defence and later to Companies House. Like Kay, Dave is involved in helping staff understand and embrace the changes to come.

Dave says: “As a people change manager, one of the things I have to help everyone on is their own transitional journey.

“I have to be able to sit down with people and ensure that the project managers aren’t just looking at delivering a thing, but that we reach out to people and create awareness of the reasons why we’re doing this, why we’re doing it now, and what it means for them.

Dave is relishing the challenge ahead and credits the organisation for the Adaptable, Bold, and Curious (ABC) behaviours it has adopted.

He adds: “It will mean that Companies House will become a truly exciting place to be over the next few years. The change team I think has really been, if not at the heart of a lot of these transformational programs, then playing a key advisory role.”

“I like the ABC behaviours that we’ve got. At Companies House it’s about self-improvement and continuous improvement within the team. Being curious is about seeking ways to improve.”

John-Mark Frost, Director of Transformation Delivery at Companies House, is delighted to have the likes of Lance, Dave, and Kay on board.

“We value greatly our links with the armed forces and the contribution ex-service personnel and veterans like Lance, Dave and Kay have made, and continue to make, on our transformation journey.

“Their skills and experience continue to prove invaluable to us as we look to implement some of the biggest changes in Companies House’s history.

“Although we face many challenges, I’m confident that with our great people on board, we will be successful.”