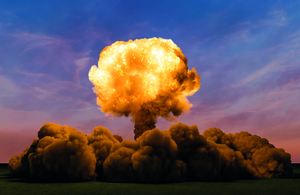 DBS Veterans UK have worked with The British Nuclear Test Veterans Association (BNTVA) to develop enhanced guidance to support claimants belonging to the Veterans Nuclear Test community. Improved content, signposting, an additional claim form and a bespoke printable pdf leaflet are now available to help those Veterans claiming for conditions specific to their service as a member of this community.

Over 20,000 military personnel were present at the UK nuclear weapon tests between 1952 and 1967 in Australia and the South Pacific. The tests were the largest tri-service event since the D-Day landings. Nuclear Test Veterans, who believe they have suffered ill health due to service can apply for no-fault compensation under the War Pensions Scheme which has no time limits and a low standard of proof. War Pensions are payable in respect of illness or injury due to Service in HM Armed Forces before 6 April 2005, with the benefit of reasonable doubt always given to the claimant. Decisions are medically certified and follow consideration of available service and medical evidence, where evidence supports a causal link to service, entitlement will be given.

You can make your claim by downloading an AFCS and War Pension Scheme claim form. If you think your condition was caused by exposure to ionising radiation during the UK nuclear test programme it may speed up your claim if you also complete the additional Nuclear Test Veteran (NTV) Priority Claim: Enquiries/Request Form. What information is needed?

Free independent advice is available from the Veterans Welfare Service or other charitable organisations. The BNTVA may also be able to assist you as they have a wealth of knowledge to share and have links across the world with other Atomic organisations including America, France, Australia, Fiji, Christmas Island and New Zealand.

For more information and help please click the LINK HERE