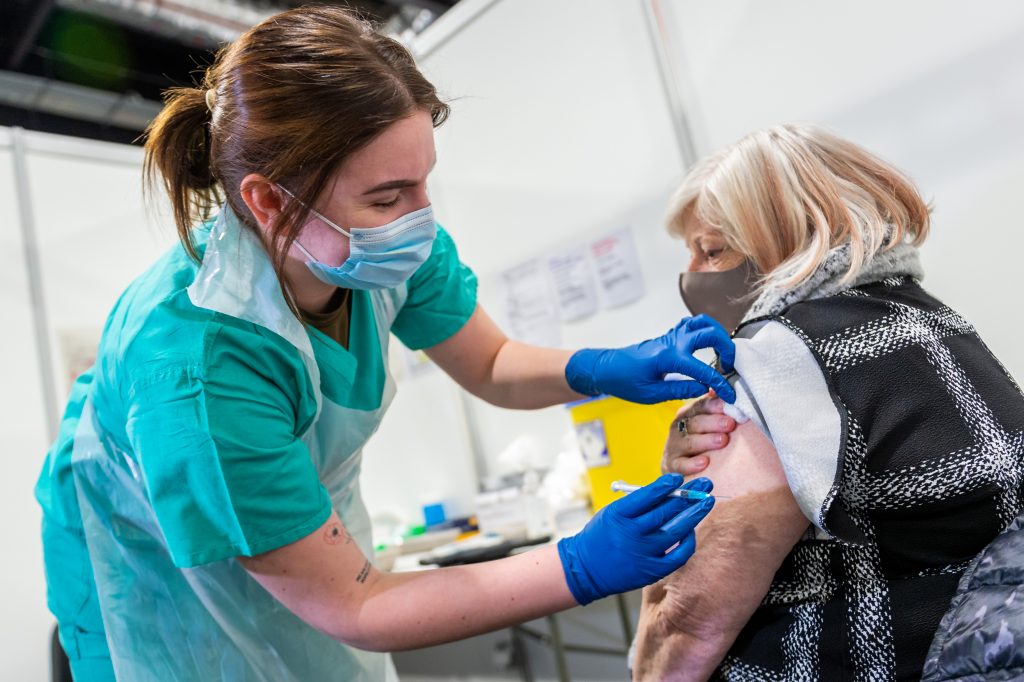 Private McLean from 3 Medical Regiment administers a vaccine to a patient. Image was taken at The Event Campus Aberdeen, in Scotland.

A further 353 Armed Forces personnel will deploy to locations across Scotland as part of the continuing military support to the testing and vaccine delivery programmes.

In the largest single deployment of military personnel in Scotland since the start of the pandemic, the uplift will take the total number of Armed Forces personnel supporting the Covid response in Scotland to 466.

“The UK Armed Forces have demonstrated their professionalism and resilience throughout this pandemic.

They are dedicated to delivering support to the fingertips of these islands and the increase of personnel in Scotland shows our commitment to assist the civil authorities wherever and whenever needed in the fight against Covid-19.”

An additional 33 defence medical staff, from across all three services, will join their 57 colleagues already working as part of the Vaccine Quick Reaction Force. Split across three vaccination teams, military personnel will assist NHS staff at vaccination centres in Dumfries and Galloway and Fife.

“The vaccine roll out is the largest medical deployment this country has ever seen. I’m grateful for the efforts of our armed forces as we work together as one United Kingdom to make sure everyone eligible can get their jab as quickly as possible.

“The strength of our Union is never clearer than in the power of our united response, and with over 13 million people vaccinated across the whole of the UK, we are on track to meet our target of offering a first dose to the top four priority groups by 15 February.”

As part of the Scottish Government’s programme of Asymptomatic Testing a total 320 personnel, from Regiments based across Scotland, will support the roll out from 15 February.

170 personnel from the 39 Engineer Regiment, based at Kinloss Barracks, and 75 personnel from both the 2nd Battalion Royal Electrical and Mechanical Engineers and the Royal Scots Dragoon Guards, based at Leuchars Station, will now spend an initial week planning and preparing, before helping administer the tests the following week.

“Our fantastic British Armed Forces have played a key role in the fight against Covid-19 in Scotland – from coordinating the emergency response in the early days of the pandemic, to setting up testing sites in the summer, and assisting with the first vaccination centres. We are grateful for all their efforts to keep us safe and help defeat the virus.

“Getting jabs into arms is essential, and I am grateful that military personnel will continue to help with Scotland’s vital vaccination programme.

“Alongside the rollout of vaccines, testing remains extremely important. I am pleased that the expertise of our armed forces will help set up Scotland’s new asymptomatic testing programme.

“As we continue to see during the pandemic, the strength of the Union and support offered by the UK Government has never been more important.”

The Armed Forces have supported Scotland in a range of ways throughout the pandemic; currently 32 planning and liaison staff are working with NHS Scotland and the Scottish Government. 24 logistic support staff, mostly from Edinburgh-based 3rd Battalion The Rifles, are also assisting health boards run vaccination centres in Grampian, Dumfries and Galloway, Borders and Lothian.

The 98 members of the Royal Scots Dragoon Guards already deployed to help set up 80 Vaccine Centres across Scotland will successfully complete their task on Monday, when they handover the sites to NHS Scotland.

Since March 2020, the UK Armed Forces have provided Scotland with planners, logistics specialists and aircraft medical evacuation capability, as well as the delivery of a Mobile Testing Unit service throughout last summer.

Across the UK there are over 5,200 personnel committed to winter and COVID-19 operations are supporting 80 different tasks in the UK and abroad – this includes the vaccine rollout, NHS support and community testing across the UK.