Over 5,000 Armed Forces Deployed In Support Of The Covid Response In The Biggest Homeland Operation In Peacetime 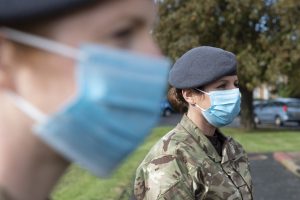 Over 5,000 Armed Forces personnel are currently deployed to support the response to the Coronavirus across the UK, working on 70 different tasks ranging from schools testing to the rollout of vaccines.

This is more than at any previous point in the pandemic and the biggest homeland operation the UK has ever seen in peacetime. Thousands more are supporting efforts through their day jobs in military planning, Defence Medical Services, Defence Science and Technology Laboratories and elsewhere.

More military personnel are being deployed to support community testing in:

In Manchester today (4 January) another large scale task starts, with 800 personnel deploying from nine regiments across the British Army at the request of the Greater Manchester Combined Authority (GMCA), through the Department of Health and Social Care (DHSC). These personnel will prepare to work across all ten local authority areas of Greater Manchester to carry out targeted asymptomatic testing of specific populations that may be at a higher risk of infection including social care staff, key workers, public facing occupations such as bus drivers, and those in high risk environments such care homes and shared accommodation for the homeless. The task builds on lessons from previous asymptomatic community testing in Liverpool, Lancashire, Merthyr Tydfil, Medway, and Kirklees.

In addition to community testing, military personnel remain on-task testing hauliers in Dover and helping to establish ten new testing sites to improve the flow of traffic across the Channel. As of today, 515 personnel are on task in Kent and elsewhere providing testing to hauliers.

1,500 Armed Forces personnel have also been provided to support schools testing, with local response teams providing virtual support and phone advice to institutions. Personnel also on standby to deploy at short notice to provide in-person support. Testing will continue as planned with two rapid Lateral Flow Tests available to all secondary school and college students and staff at the start of term to identify asymptomatic cases, break chains of transmission and beat the virus.

The new year will see new levels of Armed Forces support to overcoming this pandemic. Thousands of service personnel are working throughout the United Kingdom, wherever they are needed to assist the civil authorities.

Manchester is the latest of those tasks and will be an important contribution to protecting the highest risk groups as the city seeks to recover. As a North West MP I am acutely aware of the considerable time many of us have been labouring under some form of lockdown and I hope our soldiers will help us get to the day when these restrictions will start to lift.

We are enormously grateful to the Armed Forces for lending their support to these important community testing programmes. Around one in three people with coronavirus showing no symptoms, asymptomatic testing is crucial to identifying those who might be unknowingly infected, and protecting our most vulnerable.

These community testing schemes are part of a national testing programme with millions of lateral flow tests arriving in schools tomorrow, for the testing of students and staff, to add to the hundreds of thousands of asymptomatic tests currently being conducted in care homes, across the NHS and in critical infrastructure workplaces and food manufacturers.

While the Army, alongside thousands of medical professionals and volunteers, help roll out the vaccination programme, we must remember that the first line of defence against the virus remains to wash our hands, cover our faces and keep space.

I am incredibly proud of all the servicemen and women who have worked tirelessly for most of this year on Operation RESCRIPT, the military effort in support of the government’s campaign to tackle COVID-19.

In recent weeks, our amazing staff have deployed at short notice to set up and staff community testing centres across the country in support of the NHS, DHSC, Devolved Nations and local communities. They have conducted a successful testing pilot in schools and contributed to vaccine rollout planning. Both Regular and Reservist personnel stepped up on Christmas Eve to help clear the backlog of trucks in Kent, setting up testing facilities overnight when they would otherwise have been spending the festive period with their families.

I am humbled by the sacrifice and dedication of all our people from the Royal Navy, British Army and Royal Air Force as we continue to contribute to our nation’s fight against the coronavirus.

The MOD has deployed 10 military planners to assist the Vaccine Task Force, with over 150 personnel deployed across the UK to support organisational and logistical components of the Deployment Programme. Two separate military planners are seconded to support the Vaccine Task Force Director. Additionally, 20 personnel are assisting with regional vaccine planning, end-to-end logistics and delivery.

From 11th January a Vaccine Quick Reaction Force is being established, with their training for the role beginning today. This will initially be 21 teams of six personnel assigned to the seven NHS England regions, able to provide surge support to the vaccine roll-out if required by local health authorities.

In Wales, 90 service personnel are deployed to support Health Boards in rapidly establishing and operating vaccination centres. For the first-time trained defence medics will also support the administering of the vaccine. Ninety-four military personnel, including medics and drivers, have embedded with the Welsh Ambulance NHS Trust to support them by driving Ambulances.

In Scotland, military planners are supporting the testing and vaccine programmes. Earlier during the pandemic Armed Forces personnel supported healthcare professionals to deliver testing at Glasgow Airport, and RAF Puma helicopters were deployed to Kinloss Barracks in Moray to provide emergency assistance to NHS boards and trusts across Scotland. In Northern Ireland the Defence Estate is being loaned to the PSNI for their use and the Armed Forces have placed medevac capabilities on standby for Covid-19 patients when needed.