The event promises to be a mix of career advice, training, housing and mental health elements. It is free to attend for all military service leavers, veterans and their families.

The event will be held at St James’ Park, Newcastle on Thursday November 1, with doors opening at 10am until 3pm. 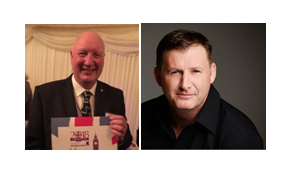 Pathfinder is delighted to add two guest speakers to the list of exceptional content on the day with the addition of speakers Nick Wood and Steve Heaney MC.

To register for free tickets for these sessions please see the links below. Ticket holders must have registered for the free main event.

Kicking off proceedings at 10:05 will be Nick Wood from York St. John University. Nick delivers the Military Human course, looking at the emotional side of leaving the forces.

Nick is the Education and Development Lead (Military Culture and Transition) at York St John University. He developed The Military Human series of CPD training courses in 2012 to enable NHS health and social care staff to support veterans with their transition to civilian life. The Understanding Military Culture and Transition training has been delivered in partnership with over 30 different organisations including Local Authorities, Criminal Justice System, Health Education England and NHS trusts across England and Wales with nearly 2000 staff having received the training. Nick was a Soldiering On Awards finalist in 2018 as a Forces in Mind Trust nominee in the Working Together category.

Nick joined Royal Navy (Fleet Air Arm) as an Aircraft Engineer and saw active service in the Falklands in 1982 with 800 Naval Air Squadron Sea Harriers on board HMS Hermes. After leaving the Royal Navy he joined HM Prison Service were, whilst supporting offender’s to address their offending behaviour and preparing them for resettlement, he created and developed the Veterans in Custody Support model to identify and support offenders who were former members of the Armed Forces. The VICS model was adopted as best practice by the MOD and MOJ and in 2010 he became the VICS national coordinator for all HM Prisons in England and Wales. In 2010 Nick was presented with the HRH Princess Royal Butler Trust Award for his veterans support work. He volunteered as a Royal British Legion community case worker for 2 years and has also supported the SSAFA Prison In Reach project team for a number of years.

Nick sits on the COBSEO Veterans in the Criminal Justice System cluster group and supports both the Yorkshire and Humber and North East NHS Armed Forces Commissioning and Network groups. He delivers the Military Human CPD to a wide range of professional staff and has introduced the subject along with Occupational Therapist colleagues into student lectures at York St John University.

Rounding off the event, will be Steve Heaney MC. Steve will be talking about CV writing skills and translating your military CV into civilian speak, how he began his business and the art of writing books.

As CEO of this company, Steve Heaney MC is perhaps the most authentic Survival + Adventure Master in the UK. His knowledge and situational experience in the world’s most diverse climates is undisputable. With two Sunday Times best selling books to his name and a major feature film of his and his colleagues exploits in Sierra Leone currently in the offing there are few better people to learn from.

Steve Heaney joined the British Army in 1986 initially as a boy soldier serving as a junior parachutist before completing adult training at Depot Parachute Regiment and Airborne Forces. In 1987 he was posted to 3rd Battalion Parachute Regiment. During his time in 3 PARA he saw active service in Northern Ireland where he was awarded a GOC’s Commendation, and trained overseas in the United States, Cyprus and Kenya.

In January 1990 he undertook selection for X Platoon more formally known as the Pathfinders and aged only twenty became the youngest soldier ever to pass the rigorous selection process.

Trained in the skill sets required of an operator in this highly specialised unit including Weapons and Tactics, Covert Surveillance and Reconnaissance, High Frequency and Satellite Communications, Combat Medical Techniques and Trauma Management, Advanced Demolitions and Sabotage, Combat Survival and Resistance to Interrogation.

Heaney was regarded as one of the most accomplished parachutists in the military and was at the leading edge of High Altitude Parachuting and helped to advance most of the techniques that are employed by Special Forces today such as High Altitude Low Opening (HALO), High Altitude High Opening (HAHO) and the space age High Altitude Parachutist Life Support System (HAPLSS): an insertion method designed to allow operators to jump from altitudes well above 30000 feet. Heaney was also responsible for the initial trials and development of the Military Tandem Master system and became one of a very select few to qualify in this technique.

During his decade long service in the Pathfinders, Heaney led training teams around the world to instruct foreign forces in the tactics, techniques and procedures required to operate as an advance force. He worked alongside and in conjunction with the Special Forces of every one of the UK’s partner nations and was instrumental in the forging of relationships and the development of standard operating procedures.

Heaney saw active service in Kosovo in 1999 and was the commander of the British Battle Group’s most demanding patrol during the initial liberation of the country. His patrol was the first team to cross the border from Macedonia into Kosovo operating beyond the reach and support of the remainder of the Battle Group’s assets.

In 2000 Steve Heaney was the Pathfinder Platoon Sergeant as 26 men of X Platoon were deployed to Sierra Leone as part of a Task Force responsible for the evacuation of entitled personnel from that country in the face of certain slaughter at the hands of the Revolutionary United Front (RUF); a murderous rebel organisation famed for their brutality and signature atrocity of amputating the limbs of men, women and children.

During this deployment the Pathfinders were tasked to stop the RUF advance towards the country’s airport and then to its capital Freetown. X Platoon, positioned in the village of Lungi Lol were deliberately exposed with the aim of enticing the RUF, believed to number 2000 fighters, to attack their position; the aim being to inflict such a blow that they would think twice about continuing their assault on to the capital. Originally planned to last just 48 hours the mission mutated into a 16 day siege, the Pathfinders working with the local villagers had managed to construct some hasty defences, consisting of battle trenches and rows of sharpened bamboo stakes, they forged homemade claymore mines from old food tins and shrapnel scrounged from the village.

On the 17 May 2000 the village was attacked by a significant rebel force, the Pathfinders engaged the rebels during a vicious close quarter battle.

Steve Heaney was awarded the Military Cross for his actions in taking control of the battle, becoming the first Non-Commissioned Officer in the unit’s illustrious history to receive this decoration.

​The heroic actions of X Platoon at Lungi Lol stopped the RUF advance in its tracks and helped to restore peace to Sierra Leone.

Steve took the decision to leave the Pathfinders in 2001 and having trained as a Close Protection Officer he went to work for an extremely high profile UHNW businessman in London. Steve’s role was to provide security and executive protection to the principal and his immediate family whilst in the UK and holidaying abroad.

In 2002 Steve became a Senior Military and Security Advisor to the United Arab Emirates government, his role was to provide advice and training across the full spectrum of Dismounted Close Combat and Internal Security Operations; a position he held for over 13 years.

Steve Heaney has written about the operation in Sierra Leone in his bestselling book Operation Mayhem, his second book X Platoon also a Sunday Times bestseller, describes his early life, entry into the Parachute Regiment and then selection and service with the British Army’s Elite Pathfinders.