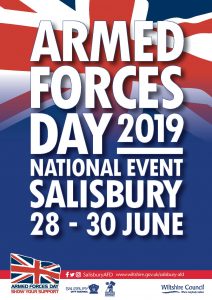 Pathfinder magazine was today announced as a key media partner for the celebration of the Armed Forces which will bring thousands to Salisbury on the last weekend of June (28 to 30).

The international magazine is the leading monthly military resettlement magazine distributed to over 25,000 service personnel, civil servants and veterans all over the world. Started in 1991, there is also a digital online version of the magazine.

Baroness Scott, leader of Wiltshire Council said: “Pathfinder is distributed to thousands of service personnel, both in the UK and abroad. To have the team there onboard is fantastic, and will mean we can really spread the word to our serving military. The magazine coverage will be a great addition to what is an extremely important date in the military calendar. As such a proud military county, I am looking forward to recognising and celebrating our Armed Forces and the vital role they perform in protecting us and our country.”

Pathfinder editor, Mal Robinson said: “We are naturally delighted to be a media partner for Armed Forces Day National Event 2019 in Salisbury, working closely with Wiltshire Council in the build-up and on the weekend of proceedings. It will be the largest Armed Forces Day ever and we will be providing military resettlement advice in terms of second careers, training and mental wellbeing over the course of the three days. We look forward to seeing as many people as possible over what will be a tremendous occasion for the military community.”

There is a packed programme over the three days with Friday focusing on saying thank you to serving military personnel with a free barbecue for them and their families followed by live entertainment that is open to everyone.

On Saturday morning the military will parade through the streets of the city centre, a spectacle that is expected to be watched by thousands of people. The line-up at Hudson’s Field on Saturday includes an air show, military demonstrations, live entertainment culminating with free to attend live entertainment and fireworks.

Sunday focuses on veterans and young people those who have served and those who may serve with a commemoration and drumhead service, supported by the Royal British Legion, with the Bishop of Salisbury and padres leading the service. There will also be the opportunity to help the event attempt to break a record by creating the world’s largest human poppy in the main arena.

Local bands and acts Duck n Cuvver, The Treblemakers and Salisbury Rock Choir will each perform on the main stage on one of the three days at Hudson’s Field after winning a Facebook competition.

The platinum sponsors are KBR Aspire Defence and Lovell. SSAFA, the armed forces charity, has been announced as the official main charity sponsor and the Royal British Legion is a charity partner. General Dynamics, Landmarc, MiPermit and Nationwide Engineering are also supporting the event as gold sponsors.