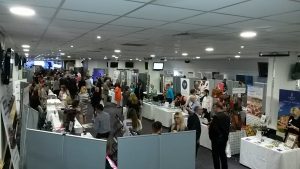 The first ever expo catering for both serving troops and veterans has been announced to take place in Newcastle.

Over 30 exhibitors with specialist breakout sessions to advise military leavers on career options, combined with expert advice for veterans will be on offer.

Pathfinder International editor, Mal Robinson, himself a veteran after serving in the RAF for 9 years  explained the ethos behind the event.

Robinson said: “I have attended many careers fairs and exhibitions in the military resettlement industry and none have covered both people currently serving in the Armed Forces and those who are classed as Veterans. Many people see the term “veteran” and associate this with the elderly population, which of course there are many who have served. However, in the modern day, many who we class as veterans are sometimes in their early twenties, having fought in Afghanistan and Iraq. It is these people that require our continued support and hopefully this expo will help break down the barriers for veterans.”

The expo is free of charge to serving military personnel in their resettlement phase and to veterans of all ages. Doors open at 10am until 3pm.

Tickets and more information can be obtained here: https://www.eventbrite.co.uk/e/the-bae-systems-armed-forces-veterans-resettlement-expo-tickets-48596043073