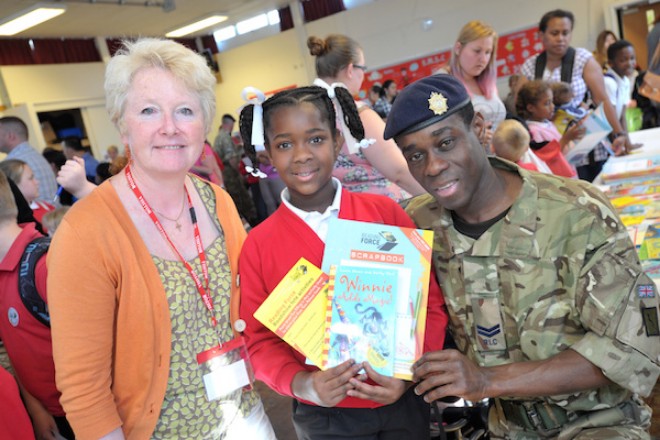 The Founder of military charity Reading Force, Alison Baverstock, has been recognised with The Point of Light award which acknowledges volunteers who make a difference in society and is administered by the Prime Minister’s office in collaboration with the Department for Culture Media and Sport…

Publisher, writer, academic, and founder and director of Reading Force, Alison Baverstock has been linked with the Forces for nearly 40 years. She became an Army wife in her twenties, brought up four children with her soldier husband who served for 35 years, and is now the wife of a veteran.

Through the years of managing a peripatetic military life and long periods during which her husband was deployed, Alison found sharing and talking about books helped them overcome the distance. She then asked her children to share books with him, talking about them over the phone when he was deployed, initially on training and in Northern Ireland and later in Kosovo, Afghanistan and Iraq, and they too discovered this was a great way to connect.

Alison had the simple but effective brainwave that all military families could connect in this way, using books to keep children communicating well and connected to their deployed parents and to keep the parents far away from home involved in family life. In 2011 Reading Force was piloted in Aldershot, home of the British Army, with the addition of a scrapbook, which families could fill with their thoughts about the book shared. The pilot was a success and impacted families positively.

Reading Force has expanded to become a national charity, supporting tri-service military families, ex-Forces families, cadets and reservists, throughout the UK and posted overseas, and gives every child who participates a special certificate.

To date, working with schools, other military charities and organisations, the charity has distributed 120,000+ scrapbooks to Forces children, and posted books to share to 8,000+ children to encourage them to read together. The charity is directed by Alison and has three part-time members of staff.

For eight years, since day one of the Aldershot pilot, Alison has steered the Reading Force initiative with vision, compassion, and resourcefulness in the face of the financial challenges all charities contend with, entirely voluntarily. She has expanded Reading Force from a small pilot to the ‘go-to activity’ for schools who wish to better support their Forces children, and families who have discovered the benefits of taking part in Reading Force.

Alison said: “I am delighted to accept this award on behalf of the team that manages and delivers Reading Force. Forces families tend to be out of the limelight; we excel at just getting on with it, and so for the Prime Minister to acknowledge both our efforts and the people we support, is a really precious thing”.