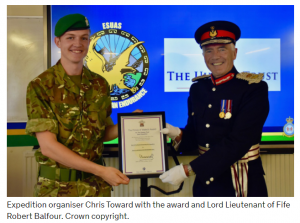 East of Scotland Universities Air Squadron (ESUAS) has received The Prince of Wales’ Award for The Ulysses Trust Best Expedition.

The award recognises Exercise MONGOLIAN ENDURANCE 2019 that saw 11 students and 3 mountain bike instructors deployed to the remote Mongolian countryside from 22 August to 7 September 2019. The team cycled 680 kilometres across deserts, steppe and mountains.

Lt Col Davies noted the impact of the expedition on both the unit and the officer cadets who took part in the adventure:

It was great to hear how this exercise has helped support ESUAS’s recruitment and retention, particularly after the last 18 months we have just been through. Officer cadets spoke passionately about how their time in Mongolia has affected their lives. This included an officer cadet who has decided to become a Reservist because of this experience and plans to join the Army Mountaineering Association. Exercise MONGOLIAN ENDURANCE 2019 was a worthy winner of the award and a great example of how expeditions can make a real difference to individuals and units.

The annual awards are selected from over one hundred Cadet and Reservist expeditions supported by the Trust. Prior to the presentation, APO Olly Tidswell and Officer Cadet Chris Toward hosted an informative slide and video presentation on the expedition route. Off Cdt Toward is an ESUAS alumni member and was the main expedition organiser.

The aim of the expedition was to utilise the harsh Mongolian landscape to enhance the attributes of leadership, self-sufficiency, physical and mental endurance, teamwork and risk management.

The Ulysses Trust granted £6,000 towards the cost of the expedition, with additional funding coming from Highland RFCA.

The expedition comprised three stages, starting with a three-day ride across the Gobi Desert; Stage 2 was a 70km ride through the Arts Bogd mountains; and the final stage was spent in the Khangai Mountains. The ambitious and physically demanding expedition has had a significant impact on the unit, boosting morale and improving recruitment and retention. Participants said the highlights included being part of a great group, the scenery, and the chance to meet locals. Challenges included it being physically and mentally demanding, but they said it also presented an opportunity to learn and appreciate everyone’s limits and to work flexibly to accommodate these.

Exercise MONGOLIAN ENDURANCE was a genuinely surreal experience, with a tremendous sense of accomplishment upon completion. It was inspiring to see our team work so efficiently together, with empathy on show, and so I am thankful for the opportunity.

Others present at the 7 September 2021 presentation (that was delayed due to the impact of COVID-19) included Lieutenant Colonel Andrew Macnaughton, representing Highland RFCA.

The full expedition report can be found on the Ulysses Trust website.