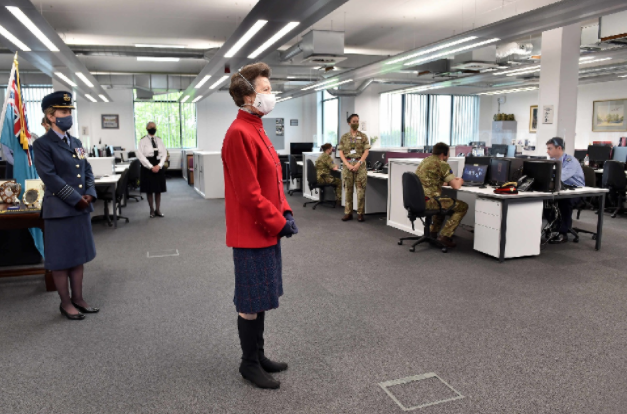 HRH The Princess Royal visited Worthy Down to tour and open the Defence College of Logistics, Policing and Administration and The Royal Logistic Corps Museum.

Over the last few years, the site, which is near Winchester in Hampshire, has undergone a £300-million transformation process to become a training centre for military logisticians, police officers and administrators from the Royal Navy, British Army and Royal Air Force. Relocating military functions and personnel from Princess Royal Barracks, HMS Raleigh and RAF Halton allows the easy sharing of expertise and facilities across all three services.

The programme has seen the construction of 27 new buildings including accommodation, teaching spaces, medical and dental centre, Regimental Headquarters and facilities for catering, retail and leisure including sports pitches and a gym. The construction work was led by the Defence Infrastructure Organisation (DIO) with Skanska as the principal contractors and AECOM as project managers.

Her Royal Highness was shown around the site by Brigadier Caldicott CBE and the Lord Lieutenant of Hampshire, Nigel Atkinson Esq. She signed the Visitor’s Book, met VIPs and revealed a commemorative plaque. The tour included two realistic working environments for the Royal Navy, a replica ship’s galley and an area for logisticians to practise loading supplies. This environment is designed to replicate the parts of a Royal Navy ship, so trainees can practise loading supplies from a replica quayside, over a gangway and onto an area representing a flight deck, before bringing it inside the ‘ship’ down ladders.

Her Royal Highness was also shown the ‘Village’ which was created by Sodexo and brings catering, retail and leisure together in one place for trainees. This facility helps to build community, create connections and improve the quality of life for trainees and staff.

As Colonel-in-Chief of the Royal Logistic Corps and newly announced Royal Patron of The RLC Museum, Her Royal Highness also formally opened the brand-new purpose-built museum. She met museum donors and was taken on a tour of a new exhibition that tells the story of how the British Army was moved, equipped and supplied during its campaigns from the Battle of Agincourt to Afghanistan.

Her Royal Highness was shown a wide range of exhibits including a replica of the Marlborough Cart which was the world’s first purpose-built military logistics vehicle, the Rolls-Royce Field Marshall Montgomery was driven in when he landed in France shortly after D-Day and Napoleon’s field bakery captured at the Battle of Waterloo. She also saw a large collection of horse-drawn and motorised military logistics vehicles, including a WW1 horse ambulance, bomb disposal vehicles and equipment, weapons, uniforms and the world-class Royal Army Service Corps and Royal Corps of Transport medal collection, which features several Victoria Crosses and medals won at the Battle of Waterloo,

The museum opens to the public on 18 May 2021, following COVID-19 guidance, and offers free admission, excellent on-site facilities, guided tours, a research room and library, a brand-new museum shop, on-site café and plenty of free parking.

The DCLPA is honoured that HRH The Princess Royal has formally opened the DCLPA here at Worthy Down. The opening marks the culmination of Project WELLESLEY, which has seen all three Services combine logistics, policing and administration training under one College. The project is a great example of effective cooperation between the military, DIO and contractors for the benefit of the Armed Forces. The brilliant facilities here at Worthy Down are truly world-class and have helped create a training centre of excellence that is second to none.

A project of this size takes some time to see through from inception to completion and I’m thrilled we’re now at the end of what has been a large and important piece of work for DIO. The huge range of new facilities we’ve provided will really benefit everyone working and training at Worthy Down and the museum is an appropriate tribute to the vital work of The Royal Logistic Corps.

The Corps is honoured that our Colonel in Chief HRH The Princess Royal has agreed to be the Patron for the new RLC Museum and has formally opened the Museum in its new location today, following months of hard work by the Museum team. The Museum opening sees the home of the Corps and our rich heritage firmly established at Worthy Down alongside the centre of professional logistic excellence at DCLPA. The fantastic state of the art facilities here at the new RLC Museum provide a focal point for past, present and future generations of the Corps family to and present a fascinating opportunity to showcase military logistics to the public”.

I’m delighted to see the completion of this landmark programme to provide world-class facilities for our Armed Forces to live, learn and work. I’m particularly proud of the approach to combine modern methods of construction with significant sustainability and biodiversity measures that has made Worthy Down an exemplar for its green credentials, while providing the high-quality facilities our service personnel deserve.

Today’s official opening marks the successful completion of this complex programme to deliver world-class training facilities for the Armed Forces. AECOM provided the full suite of Project Management services, working closely with our partners, DIO and Skanska. The scheme’s truly collaborative partnering approach saw all three organisations come together as one team, enabling the efficient delivery of a huge range of buildings without impacting ongoing operations. We’re proud to have contributed to these state-of-the-art facilities that are of national defence importance.