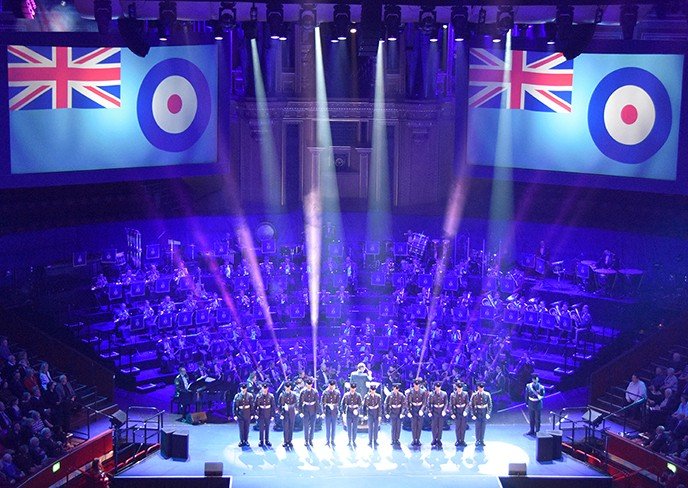 Inspired by their hugely successful, sold out 100th anniversary show at the Royal Albert Hall in 2018, top-flight musicians from the Royal Air Force are tuning up in preparation for two special concerts this spring…

With performances at the Symphony Hall, Birmingham on March 30th and the London Palladium on April 1st, A Night with the Royal Air Force & Friends will provide an entertaining musical insight into today’s RAF and how Space is beginning to shape its future role. This audio-visual spectacular will showcase the virtuosity of the Bands of the RAF, the Salon Orchestra as well as the big band sound of the legendary RAF Squadronaires.

Joining them on stage will be Spandau Ballet’s Martin Kemp and his wife Shirlie, the former Wham! backing singer as well as one half of the 80s pop duo Pepsi & Shirlie. Martin and Shirlie, who have been touring with their Big Band Broadway show, will perform two celebrated numbers from the Great American Songbook – You Make Me Feel So Young and The Way You Look Tonight.

Featuring a thrilling programme of music that seamlessly blends the traditional with more contemporary numbers by Queen, Bowie and McFly’s Tom Fletcher, A Night with the Royal Air Force & Friends takes the audience on a thrilling journey around the globe and on to the final frontier – Space, courtesy of a specially-recorded message from astronaut Tim Peake.

Among the highlights of the evening will be a special appearance by actress and rapper Paigey Cakey who will perform alongside the Queen’s Colour Squadron of the RAF. Also taking to the stage will be a rousing youth choir as well as RAF Air Cadets who will perform their own unique vision of the future through poetry and prose.

Add to this a rousing finale featuring This is Me from the smash-hit musical The Greatest Showman; A Night with the Royal Air Force & Friends is set to be one of the best feelgood nights out in London and Birmingham for a long time.