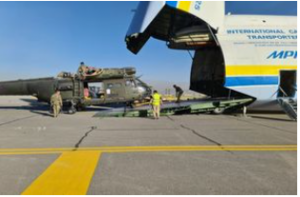 The RAF Puma detachment serving in Afghanistan in support of the NATO Resolute Support Mission since March 2015 has now returned to RAF Benson.

The RAF Puma detachment serving in Afghanistan in support of the NATO Resolute Support Mission since March 2015 has now returned to RAF Benson, as part of the withdrawal of NATO forces from the country.

The three Puma helicopters and around 50 personnel from 33 Squadron and 230 Squadron based at Benson Joint Helicopter Command (JHC) that have been serving in Kabul have now returned to the UK. The aircraft were flown from Kabul to RAF Brize Norton on an Antonov AN-225.

“The Puma detachment has provided invaluable support to the NATO mission in Afghanistan, helping the UK’s wider effort to develop civil society and reduce the threat of terrorism, building the foundations for a peace process.

We remain committed to supporting Afghanistan through the next few months and years, both through defence engagement and diplomatic and development support.”

During Operation TORAL, the name given to the UK element of Resolute Support Mission, the Pumas were based at Kabul International Airport. From there, they were able to provide vital airborne transport to UK and NATO forces. This included transporting personnel and equipment around the different urban, mountainous and desert terrains in the Kabul area, as well as supporting the deployment of the NATO Security Quick Reaction Force as needed.

“This is a significant time for the Puma Force as a long running and rewarding operation comes to a close. The commitment and professionalism of the whole team has been exceptional, whether they’ve been deployed or provided support from the UK. I’m extremely proud of everyone and they should look back on all that they have achieved with pride.”

During the deployment, the Pumas flew 12,800 hours, which is the equivalent of over 533 days in the air. The medium support helicopters also transported 126,000 passengers and moved 660,000kgs of freight.

“The RAF Puma Force have done a superb job in supporting the UK’s mission to train, advise and assist the Afghan National Defence and Security Forces since 2015. Their contribution over such a sustained period has been second to none and they can be incredibly proud of the significant part they played.”

The detachment has been serving as part of the NATO-led non-combat mission to train, advise and assist the Afghan National Defence and Security Forces, known as the Resolute Support Mission.

The UK Armed Forces are currently in the process of withdrawing from Afghanistan in line with the NATO mission Resolute Support.

The UK has played a critical role in developing the Afghan National Defence and Security Forces (ANDSF) and alongside our NATO allies we have built and equipped security institutions; trained 5,000 cadets, including over 300 women; and supported a stable election process. The ANDSF are now 350,000 strong and we will continue to provide assistance to them, including financial support,and build Afghan institutions’ counter terrorism capability.