Although there is a strong musical connection, Munich to Montreux is not the delayed follow-up single to the infectious 2006 hit song Paris to Berlin, but is the task that Richard Smith – late of the Coldstream Guards – and mates have set themselves to raise funds for SSAFA, the Armed Forces charity. And they will do it under pedal power. 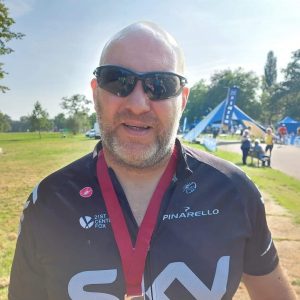 Frodsham-based Richard, 44, and in his spare time is both a Scout Leader and a St John’s Ambulance first aid trainer will lead his team next month on the 330-mile “Bicycle Race” from the Bavarian city to the pleasant town on the shores of Lake Geneva that has been home to musicians including David Bowie, Dame Joan Sutherland, Tchaikovsky, and Freddie Mercury.

For Queen fan Richard, his journey will not just be a fundraiser, but a two-wheeled pilgrimage to sites synonymous – as any real aficionado could tell you – to the legendary British rock group.

Richard, who left the Army in 2013 after being injured in training, takes up the story, saying: “Everyone thinks of the Army, your regiment, as being your family, and it can be hard for men and women leaving to adjust sometimes, and I know because since 2013, I have lost eight colleagues to suicide.

“So, me and my team are trying to show veterans of all three services that there is hope for them when they leave the Forces, and that’s why we’re raising money for SSAFA – with a ‘kind of magic’ courtesy of Queen.

“I’ve picked Munich as the start point because Queen’s 1986 album A Kind of Magic was recorded there, while Montreux was not just Freddie’s home until his death from AIDS in 1991, but where a further six Queen albums were recorded including the posthumous album Made in Heaven.”

Such is Richard’s passion for Queen that proceeds from this epic cycle ride will be split between SSAFA and The Mercury Phoenix Trust, a health charity established in memory of the late singer.

Richard ends by saying: “Basically, I hope this ride can show that even if you’re injured, psychologically, physically, or both, that you can overcome challenges and that there is support available through fantastic charities like SSAFA.

“If doing this ride saves one serviceman or woman, then I will have succeeded.”