Red Arrows Pathfinder Exclusive Interview: 2020 Is Not Quite Gone For Red One 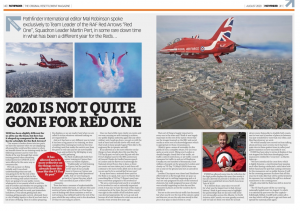 Inside the latest VJ Day 75 Special Issue of Pathfinder International…

… Pathfinder International editor Mal Robinson spoke exclusively to Team Leader of the RAF Red Arrows “Red One”, Squadron Leader Martin Pert, in some rare down time in what has been a different year for the Reds…

2020 has been slightly different for us all to say the least, but how has it shaped up compared to the usual hectic schedule for the Red Arrows?

“Our season is broken down into two parts, we have the summer when we are displaying all around the world and the winter is where we knuckle down for our training ready for the following summer and we were two thirds of the way through that winter training period when everything locked down for COVID19, so we were affected in the same way as everyone else.
We took a pause on flying initially and it was about understanding what our task was going to be for the rest of the year and here we are in July (at the time of writing) still unsure whether there are going to be any public events whatsoever in our season which is until the end of October and whether we are going to be able to actually display in front of the public.
When we got back to work, post immediate lockdown, it was about getting back into training, getting people current, obviously there is a lot of safety aspects to that if you have had a lot of time off flying. Then it is about preparing the displays, so we are ready if and when we are called to action whatever national tasking we are requested for.
And so it has been a very different year in total, it has been a big pause in our training, we then completed that training last week (at the time of writing) and that marks the switch over from the green to red suits and we are now feasible to go and perform the full display at any public gathering.”

The Reds traditionally held their winter training in Cyprus, then Greece as Martin explains…

“Traditionally we held training in Cyprus, but the past four or five years it has actually been in Greece as Cyprus was becoming busy with operational traffic, but we were hoping to go back to Cyprus this year, which was cancelled as part of the COVID measures.
There has been a measure of understandable frustration within the team, we all have the same worries at home with families, so it has been a case of dealing with those anxieties as well as not having a clear defined task for the rest of the year, which like any military unit is the drumbeat of what we are trying to achieve.
Once we had a little more clarity on events and we were carrying on with training to achieve our public display authority, again like any other military unit, heads go down, you get on with the task at hand and knuckle down with work and that tends to keep people happy. Pilots like to fly; engineers like to spanner aircraft!
It has allowed us to be more reflective on the things we have already done this year like the VE Day fly past, we had a joint fly past with the French display team for the 80th anniversary of General Charles de Gaulle’s famous speech in London and the flyover in Scarborough for National Armed Forces Day in June, so there are events we have taken part in and there will continue to be more events albeit not on the scale we are used to for a normal Red Arrows year.”

The Red Arrows fly over an empty London city for the VE Day 75 celebrations.

It may have been a watered-down year for the Reds so to speak, but I put it to Martin that something like a VE Day 75 flypast must have been somewhat poignant to be involved in?

“We are a ceremonial unit and it is wonderful to be involved in such a nationally important event. It was nice to have the trust of the chain of command as at the time, the rest of the country was right in the middle of full lockdown and it was deemed appropriate for us to go out and honour all of our forebears for what was such an horrific event seventy five years ago.
That sort of thing is hugely important to every one in the team and I think it was hugely important to the rest of the nation when they see the images beamed on the BBC and social media as some sort of acknowledgement which is appropriate in those circumstances.
I think it gave a sense of normality (to the public) if not a complete return. For us it was quite an eerie event. Flying over London is usually fraught, clearly lots of air traffic, air traffic control restrictions, or air traffic control measures for traffic in and out of Heathrow. Usually you see hundred of thousands, if not millions of people on the ground in London and clearly on VE Day 75 (May 8 2020) there was not a soul on the ground and not an aircraft in the sky.
London City airport was closed and Heathrow effectively let us fly through their air space as they had next to nothing happening and so it was not only poignant because of the historical elements, but really poignant because of what was actually happening on that day and the measures in places across the country due to COVID19.
You see on the news that air traffic has decreased, but when you fly over the top of the nation’s capital and discover you are the only nine aircraft in that piece of air space is kind of eerie in a way.”

If 2020 has allowed some time for reflection for the high profile displays this year, then surely it has also allowed for periods to lookback on the hugely successful Red Arrows North American Tour of 2019?

“It is still less than a year since we set off for what was the largest tour in Red Arrows’ history. I think it goes some way to highlight the partnerships that we do have with some very strong allies across the Atlantic. In North America and Canada, we were greatly received, and we had not been over there for at least eleven years. Being able to straddle both coasts, east to west and a number of places in between was just wonderful to wave that red, white, and blue flag wherever we went.
We would usually have moved on from talking about previous year’s events, but it has been quite nice in these quieter times to reflect and gather statistics on how successful it was.”

“We have introduced the cross bow, which is highly dynamic, a synchronised pair passing each other having conducted a mini barrel row before hand and we put that naming ceremony for the manoeuvre out on public forums. It will be the crowning moment to show that off this year, but it looks like that will be pretty limited in its exposure, but certainly this will be a stalwart manoeuvre in the coming years.”

Finally, what did the Reds have left in store for 2020?

“The VJ Day fly past will be our next big nationally tasked event on August 15, which is a national fly past over the four capitals – Edinburgh, Belfast, Cardiff and London all in one day which will be great to get out there and spread the national pride again.” 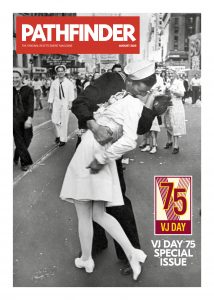