More than 150 people attended at WWII-themed music and song event in aid of SSAFA, the Armed Forces charity on Remembrance Sunday near the Commonwealth War Graves Commission cemetery at Suda Bay, Crete. Some €2,159 (around £1,813) was raised. 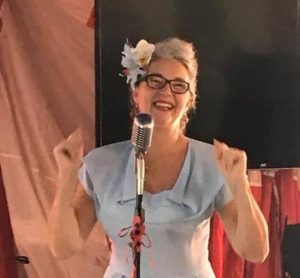 The annual event – held at Kymata Taverna in Chania – was organised and led by Prue Young, a Greek teacher and singer who has lived on Crete for nine years. There was food and a raffle, with prizes donated by locals and British expats, and Prue performed songs of the era, encouraging an audience singalong.

Prue said: “It takes months of preparation, but I’m so pleased that all the hard work has paid off and is always worth it. It was a great afternoon with songs and laughter, but also tinged with poignancy, not just as it was Remembrance Sunday, but also because 2021 marks the 80th anniversary of the Battle of Crete.”

Earlier this year, to mark the 80th anniversary of the Battle of Crete, Rikki walked from Sfakiá to Souda Bay in WWII battledress, raising money for SSAFA – a charity chosen because of the assistance it has given friends of theirs.

Prue added: “We’ll be doing further fundraising events for SSAFA on Crete next year, so watch this space!”

To find out more about SSAFA, visit ssafa.org.uk