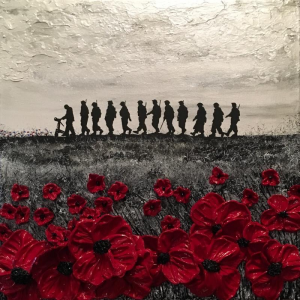 The War Poppy artist has painted “Tomorrow Will Be A Good Day” which depicts her familiar style with Captain Tom leading the troops. The 99-year old veteran who has raised over £29.2M for NHS charities by walking 100 laps of his garden before he turns 100 has captured the attention of the World, with Prime Minister, Boris Johnson even praising Captain Tom in his return speech outside 10 Downing Street yesterday.

Jacqueline Hurley said, “Happy 100th birthday Captain Tom! You are our national treasure. You are a hero, an inspiration and the pride of Britain – you’ll never walk alone!”

Jacqueline started painting the War Poppy Collection in 2014. Her first work, ‘We Remember, We Fight On’ was painted as a tribute to her friend Royal Marine Neil Dunstan, who tragically lost his life in an IED explosion whilst serving in Afghanistan in 2008.

Jacqueline’s military poppy prints have been well received by an international audience, and have very quickly proved extremely popular; she is now widely regarded as the country’s foremost Remembrance Artist.

Jacqueline paints in both expressionism and impressionism styles. Her original works are painted impasto in acrylic, using texture to create mood and depth, with red remembrance poppies juxtaposed against gritty impressionistic landscapes. Her paintings feature silhouettes which help her audience connect with the works in a more personal, emotional and sentimental way; encouraging the people she paints for to relate to the subjective nature of the paintings.

Jacqueline has previously provided artwork for front and back covers of Pathfinder and Left Right Left magazines. 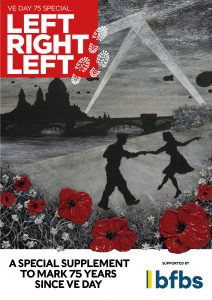 Check out the rest of her work at https://poshoriginalart.co.uk/