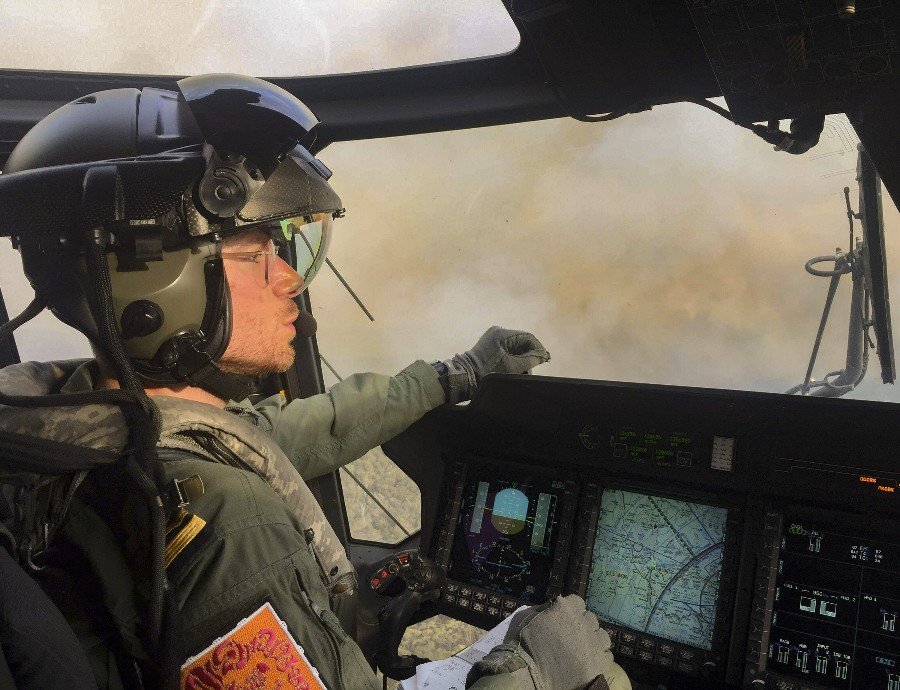 Lt Cdr Grimmer is currently flying troop-carrying MRH90 helicopters with Australian Navy’s 808 Squadron, which specialises in disaster relief operations and has been in constant action since November aiding those whose lives have been threatened by the fires. Over the new year, Lt Cdr Grimmer’s aircraft, five aircrew and 14 engineers were called to join the amphibious ship HMAS Choules, as the bushfires spread to the south-eastern tip of Australia.

Inhabitants of the small town of Mallacoota fled to the beach when the flames could no longer be held back. While the majority were rescued by the ship, the helicopter launched to search for people cut off as well as to survey the extent of the damage. HMAS Choules carried around 1,100 people alongside 117 dogs, four cats, a parakeet and a rabbit. They were safely transported along the coast to Melbourne.

Lt Cdr Grimmer said: “Watching people – everyone from a baby of two months to an elderly lady in her 90s – get off in Melbourne, relieved, saying ‘goodbye’, ‘thank you’ and shaking everyone’s hands was very gratifying, definitely the highlight and made all our efforts seem worthwhile.”

The pilot has been flying for up to ten hours a day alongside his colleagues in the most difficult of conditions, with crews expected to make life-and-death decisions on almost every sortie. He added: “The scale of the fires are phenomenal and the devastation is truly horrific. At times it seems the entire horizon is on fire with flames up to 50 or 60 feet high.

“You have to fly low because of the visibility – then suddenly you find yourself in thick smoke and are forced to either turn back or climb rapidly to avoid running into mountains. There’s a fine line between what you can do and what is not possible, with risks being constantly re-evaluated. I’m an animal lover and seeing the impact on wildlife is heart-breaking.

“We recently winched down our aircrewman from 150 feet to a man on his porch. His wife had fled the fire a few days before. She had no idea whether he was alive or the house was standing due to no power or communications. We were able to tell her both were safe – that was a wonderful feeling.”

Defence Secretary Ben Wallace said: “We always stand by to help our friends and allies and my thoughts are with the Australian people with whom we share a close bond. Lt Cdr Grimmer is an example of what our military do on a daily basis, putting his life at risk to save others. Flying in incredibly difficult conditions he is doing a job that takes courage, professionalism and skill, demonstrating the best of the Royal Navy.”

Lt Cdr Grimmer has been in the Royal Navy for 12 years, including spending six months in Sierra Leone as part of Britain’s efforts to halt the spread of the Ebola virus in 2014-15.