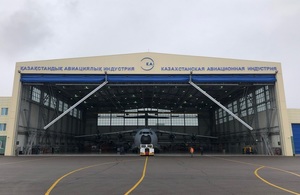 During a recent visit, which promoted the bilateral military co-operation between the UK and Kazakhstan, the capability of the RAF A400M was showcased to the Kazakh Government.

With the ability to carry a 37-tonne payload over 2,000 miles, the A400M provides the RAF with tactical airlift and strategic oversize lift capabilities. The Kazakh Government are currently considering purchasing an aircraft to meet their requirements for strategic airlift.

As part of the demonstration, the A400M was loaded with an Arlan Armoured vehicle and Airbus Test pilots showcased the aircraft’s technical capabilities to Kazakh Air Defense Force Officers.

Representatives from the RAF and Airbus briefed the Kazakh Ministry of Defense and the Ministry of Industry and Infrastructure Development on how the A400M is an efficient and innovative aircraft that could effectively support their military operations.

Defence Attaché of the British Embassy Nur-Sultan, Andrew Houlton said:
“The A400M has proven itself in service with the RAF and I am delighted that we have had the opportunity to provide assistance to the Kazakh Government as they make their decision on purchasing an aircraft to meet their requirement for strategic airlift. We are especially pleased that we have been able to support this visit despite the current coronavirus crisis.”

The A400M made its first flight on 11 December 2009, ushering in a new era of airlift capability. The first production aircraft was delivered to the French Air Force in August 2013 and entered into RAF service a year after. The A400M already has seen operational service with the RAF as well as with the French, German and Turkish Air Forces. This has included support to operations in Afghanistan, the Central African Republic, the African Sahel Region, Mali, The Falklands, the Caribbean and in the Middle East.